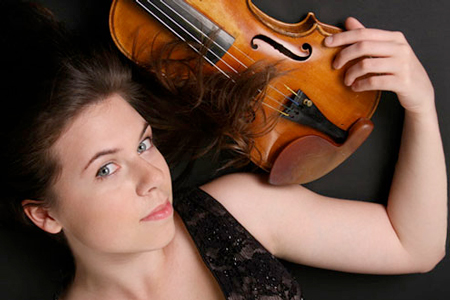 During our October conversation, Tessa Lark said that she and Armstrong met and collaborated only a few weeks before the call from Oberlin. “We’d talked then about performing together, saying we’d let each other know if an opportunity came up, and lo and behold, this one did. Then we were texting back and forth about our dream pieces, what we’d be willing to play any day of the week, what we’d be willing to learn, and what was just totally not possible in that amount of time. Through that, we devised a unique program. And Oberlin requested that I add some jazz in the recital, so I’m arranging a beautiful Latin jazz tune. I’ve never been to Oberlin, but I’ve heard amazing things about it and I’m excited to go.”

The recipient of a 2016 Avery Fisher Career Grant, Lark was also Silver Medalist in the 2014 International Violin Competition of Indianapolis, and winner of the 2012 Naumburg International Violin Competition. After graduating from the New England Conservatory and living in Boston for three more years, she decided to head back to school, and graduated from Juilliard with her Artist Diploma in May.

“I love Boston, but one of my friends thought I needed a change in my life at the time and suggested I look into the Juilliard program,” she said. “I decided to apply, of course because of the amazing history it has and the incredible facilities, teachers, and opportunities it provides, but also because it sounded appealing to try a new city. New York is a fantastic place for a musician to be, but I wasn’t interested in moving here with no agenda in place. So when I got accepted, that sealed the deal for me — and now this is my first year out of school and living here.”

Lark’s talents as a violinist transcend genre boundaries, and she was happy at Juilliard to get to perform with the school’s Jazz Ensemble at Dizzy’s Club Coca-Cola. “I was traveling so much that I couldn’t immerse myself in the jazz studies there as much as I would’ve liked,” she said. “But one of the beautiful aspects of the Artist Diploma program is that you can have lessons or coachings with anybody in the school at all — not just in classical but in jazz, theater, drama, or dance — which is phenomenal.”

Because of her interests in other styles of music, Lark asked to collaborate with the jazz department. “I had a week or two of rehearsals for the show at Dizzy’s, and I made what seem to be lifelong friends. I actually have a couple engagements coming up this year with the people I collaborated with, and I’ve stayed in touch with the coaches. I was happy that the jazz department welcomed me with open arms — it was intimidating to me because I’ve always had an interest but never a formal training in jazz. They were very generous and curious to have me there, and I learned a lot.”

Lark grew up in Richmond, Kentucky. “It’s a college town with small-town vibes,” she said. “Eastern Kentucky University is there, and that’s why my parents came — my father had a job as a wildlife biology professor at the University. I lived on a beautiful property of seven acres of land with a nice creek and a lake nearby — lots of surrounding nature.”

Did leaving for Boston present any conflicts back home in Richmond? “Especially in the very rural regions of Kentucky, there can be several generations of family in a town, so one is expected and usually prefers to just stay there with their family. But my family is all around the States, and my parents were there just because of my father’s job, so the same didn’t apply to me. There’s a lot of state pride in Kentucky. It’s a beautiful place to live and the people are wonderful, but I was always drawn to classical music, which is such a global thing. I think because of that training, I just really wanted to spread my wings and find other people with those interests.”

For a while after leaving, Lark’s background stayed with her, audibly. “I had a little bit of a Kentucky accent when I moved to Boston, and I was teased pretty quickly for that. One advantage of having a musical ear is that you can adapt to different accents, so I just got rid of it as quickly as I could. I was a little shy about my upbringing at first, but over time I realized there wasn’t anything to be shy about at all.

“Because I play a lot of bluegrass and Appalachian music, I’ve made sure to integrate that into the classical music setting — not just because I love the music but because I feel that in a big city or in the more liberal areas of the country, I would love people to know the beauty and the poignancy and the quality of that music. Some of the most amazing musicians I know are from folk genres, and happily, I can report that the attitude towards bluegrass and folk musicians is changing.”

I complimented Lark on her work to bridge the cultural gap. “We’re lucky to be in a profession like music,” she said, “because I think it’s one of the few where you really can move globally, affect all different walks of life, and inspire all different types of people with different mindsets to come together and hopefully have conversations about things that need to be discussed.”

Music director and conductor Daniel Meyer built his playlist around Cleveland themes and scenes. “Exploration CLE” made use of engaging selections from the classical canon and beyond that celebrated “what makes Cleveland so special.” Happily, he and his musicians avoided constructing a visual slide show, choosing to let the music speak for itself. END_OF_DOCUMENT_TOKEN_TO_BE_REPLACED

You could see the relationship at work on a practical level. Repertoire for two players at the same piano requires a certain choreography. There’s just one of each pedal to share, and the hand crossings left and right — which can be so fun to watch a soloist pull off — get more complicated when another person’s involved. At times, Pompa-Baldi drew a hand away from the keyboard and into his body, making room for Friscioni, and at the close of a few delicate phrases, the two were crouched together over the same final notes at one end of the instrument. END_OF_DOCUMENT_TOKEN_TO_BE_REPLACED

The signature sounds of these famous film scores are not so much John Williams’ invention as allusions to other classical pieces. The foreboding half-step from Jaws, growing more and more furious in the cellos and basses, shares something with Dvořák’s “New World” Symphony and Bartok’s Miraculous Mandarin. END_OF_DOCUMENT_TOKEN_TO_BE_REPLACED