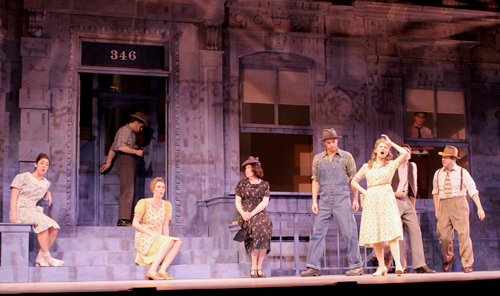 German-American composer Kurt Weill called his Street Scene an opera, but there are enough influences from the other side of musical theater to make the piece an intriguing hybrid. Oberlin Opera Theater explored all the facets of Weill’s 1947 “Broadway opera” in its masterful production in Hall Auditorium on Wednesday evening.

Weill spends his very long first act introducing twenty-two characters in eight families whose lives are jumbled together in a New York brownstone apartment building. It’s an ethnic stew that simmers in the intolerable heat of summer, revealing tensions and hinting at dirty little secrets as vignettes are played out.

Though it’s not clear at the end of the first act which of these back stories will bring the stew to a boil, the drama will eventually center in the Maurrant family. Anna is escaping from her brutish, drunken husband Frank by bedding down Steve Sankey, the milkman. Her daughter, Rose, is the unwilling object of the affections of her married boss as well as her neighbor, Vincent Jones. Sam Kaplan, a bookish law student, admires Rose, and she is attracted to Sam if for no other reason than he’s nice and would provide her an escape route. 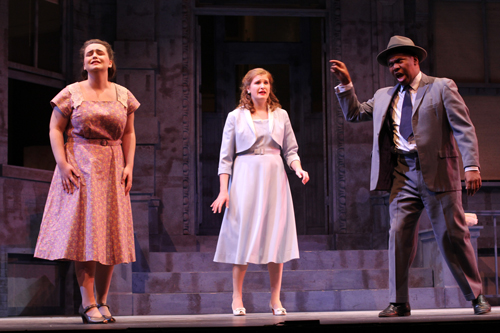 If the first act is all exposition and reflection, the action picks up dramatically in the second. Frank finds Anna and the milkman in flagrante delicto, shoots them both and flees. He’s caught by the police, and after her mother’s funeral Rose determines to leave both the neighborhood and Sam. (The opera is based on a play by Elmer Rice. There are loose ends that librettist Langston Hughes and Weill never tie up in the opera, which leave some voids both in script and score.)

The Oberlin singers and actors stepped up magnificently to the challenge of creating characters from generations both older and younger than themselves who speak with a variety of accents. Emily Hopkins was vocally splendid as Anna Murrant, and De’Ron McDaniel suitably loutish but mellow of voice as Frank. Katherine Skayhan’s Rose was believably conflicted as a character, yet she sang beautifully. 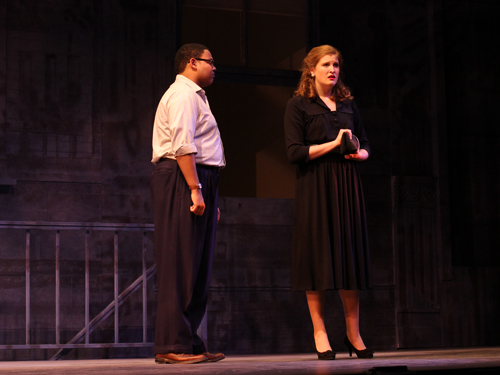 As Sam Kaplan, Joshua Blue acted with passion and sang with power and conviction, notably in his bluesy, first act monologue, Lonely House. With his over-the-top stock gestures, Daniel King brought energy and humor to the character of Lippo Fiorentino.

Descriptions of other fine actors and singers could fill pages (beside the resident principals, twenty-six walk-ons played visitors to the apartment building and formed the chorus). Especially funny was the “Lullaby” duet by perambulator-pushing nursemaids Rebecca Achtenberg and Julia Farbstein. A surprise cameo appearance by Oberlin College president Marvin Krislov and his wife, Amy Sheon, came late in the show.

In addition to drawing on a range of quasi-operatic styles, Weill reached into his own melting pot of musical influences for production numbers that were pure Broadway. A lengthy ode to ice cream (“Ice Cream Sextet”) was incited by Daniel King, and Nicholas Giunta (as Dick McGann) and Sarah Pellington (as Mae Jones) stole the show with the jitterbuggy “Moon-Faced, Starry-Eyed,” both numbers brilliantly choreographed by Martín Cespédes. 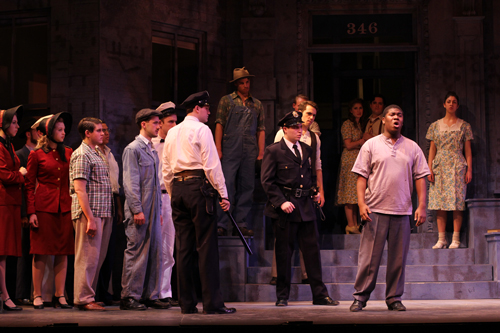 Christopher Larkin led the excellent Oberlin Chamber Orchestra, forty musical chameleons who adapted instantly and exuberantly to Weill’s kaleidoscope of musical styles. Taming that enthusiasm a bit would have given the singers and actors a better chance of being heard over the sounds from the pit.

All the action took place in front and through the windows of set designer Christopher McCollum’s evocative brownstone building façade (No. 346), attractively lit by Jeremy K. Benjamin. Chris Flaherty conjured up classy 1940s costumes for the cast of forty-eight individuals.

With all those bodies to manage, stage director Jonathon Field might have seen his role as merely that of a traffic cop, but his subtle character development and attention to the interactions of his singers and actors brought texture to the show and supplied essential narrative to its story line.

Though Street Scene has its structural flaws, Oberlin’s production was well-paced and continuously entertaining, a terrific vehicle to show off the musical and dramatic prowess of a large cast with deep reservoirs of talent.

The cimbalom was the feature of the show, an instrument capable of taking on many personas. Its performer, Chester Englander, has shaped his career around the instrument, and has inspired composers to write more repertoire for it, some of which was presented on the program. END_OF_DOCUMENT_TOKEN_TO_BE_REPLACED

You wouldn’t expect that acoustic from a glance at the nave, which is wide and long, but not especially lofty. But when I guest conducted a local amateur choir and professional orchestra in Beethoven’s Mass in C there a few years back, during the first rehearsal we released the final chord of the “Gloria” and listened in astonishment for the next several seconds. The sound continued to roll down the space like the big wave that surfers dream about. END_OF_DOCUMENT_TOKEN_TO_BE_REPLACED