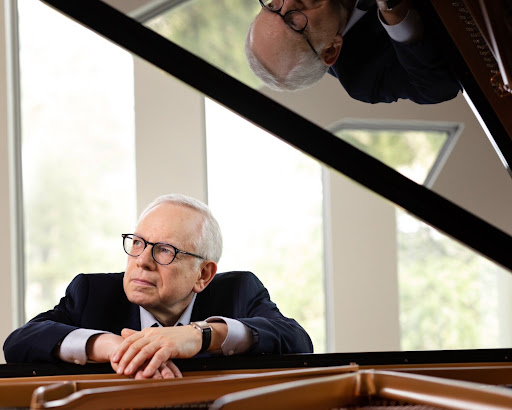 Oberlin piano professor Peter Takács celebrated the completion of a huge project in 2011 when his recordings of the complete Beethoven Sonatas were issued on the Cambria label in a handsome boxed set (read our review here).

“It was a labor of love,” Takács said in a recent Zoom interview, “as well as a kind of global enterprise.” The elaborate project included eleven discs in SACD Surround Sound produced by Sony Austria, with some elements printed in Hong Kong and designs done in Los Angeles.

The original edition of 2,000 copies had sold out by 2016, which raised the question of a reissue. Happily — albeit mysteriously — more than 500 sets of the CDs were discovered sitting in a Cambria warehouse. That inspired a reissue with several alterations in design.

“The CDs are the same, with the same wonderful sound, but the box is quite a bit slimmer, the discs are now in translucent sleeves, and the booklet is more colorful and just contains my essay, The Mind of Beethoven. Once those 500 discs are sold, that’s it,” Takács said. Click here for ordering information.

The Takács recordings distinguish themselves by including the most complete set of Beethoven keyboard sonatas — not only the famous 32, but also a discarded slow movement from the Waldstein Sonata, a four-hand work, and the three early Elector Sonatas, “the product of an ambitious 12-year-old trying to show off his bona fides. I had to practice those very hard,” the pianist said.

He wryly noted that the CD format is fast becoming an outdated technology. “They’re so 1980s. A lot of my students don’t even know how to play a CD. ‘How do I get this into my phone?’” 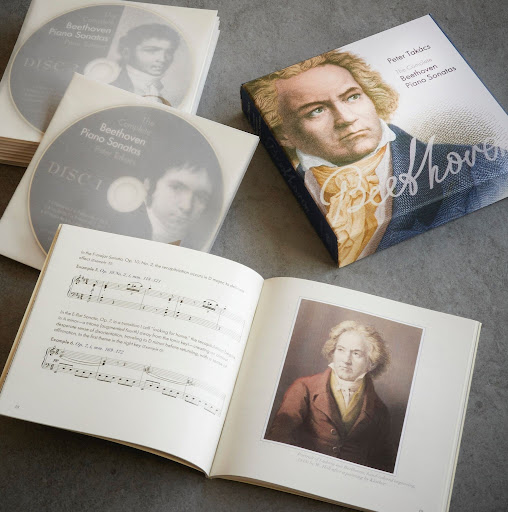 Last year was disappointing for Takács and his Oberlin colleagues and students, who had big plans for celebrating LvB’s 250th. “We started out gangbusters, then everything stopped in March.”

One project, Beethoven’s Choral Fantasy, for which Takács was piano soloist, morphed into a virtual event because of COVID. Oberlin Arts and Sciences Orchestra conductor Tiffany Chang spent hundreds of hours on a computer assembling a virtual chorus and orchestra of 80 musicians from around the world (read our article here.) “It was very Beethovenian — a challenge in the face of adversity,” Takács said.

The Oberlin professor has brighter hopes for his 2021-22 plans, including performing Beethoven’s Third Concerto with Robert Spano and the Oberlin Orchestra.

In closing our conversation, I asked Peter Takács what he might ask the Great One if he had the opportunity to have a beer with Beethoven. He had a number of specific questions about details in LvB’s scores, some quite technical and pianistic, but he thought the composer might have a question of his own.

“Beethoven would probably ask me, ‘Why do you still play my music? It’s 300 years old. Don’t you have your own music?’ For my part, I’d be curious to know his reaction to developments since his time,” Takács said. “If I showed him a score by Boulez, what would he think?”

Le mariage aux lanternes, the evening’s curtain-raiser, is about Guillot (Bradley Boatright) and Denise (Genevieve Dilan), a couple working on a farm, who are in love with each other, though the clueless Guillot can’t acknowledge it. With the help of his Uncle Matthias (David Burgher), who sends them letters saying that when the Angelus rings, they’ll find what they are looking for beneath a big tree, they eventually find — each other. Meanwhile, two widows, Franchette (Isabel Merat) and Catherine (Kylie Buckham), are also vying for Guillot’s affection (or, more cynically, plotting to acquire his property). END_OF_DOCUMENT_TOKEN_TO_BE_REPLACED