“It surpassed our goals,” Kohlberg said. “We went into the series not knowing really what to expect. We just knew that we wanted to react as quickly as possible and try to support our musicians. People were so kind and generous, and responded so well.”

While Piano Cleveland hoped to raise $15,700 over the course of the series, at last count, online donations totalled $17,663.

“The idea of a virtual competition was a thought we had when we saw that the online donations plan was working well,” Kohlberg said. “The concept motivated me to see what we can do as an organization to support those who need it now. There are so many musicians who solely depend on their income from concerts. Now that all live concerts are cancelled or postponed, there’s great uncertainty. We wanted to maintain our identity as a competition while supporting musicians.”

So how does a virtual competition work? Online, and asynchronously. After applying through videos to be screened by a jury, 30 contestants will be chosen to compete in two rounds which will be pre-recorded at five Steinway locations across the globe: Cleveland, New York, London, Hamburg, and Beijing. 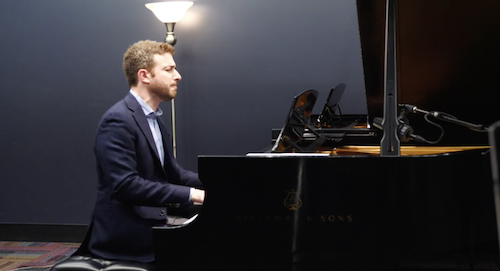 “Each of the rounds will be streamed at local times in Cleveland, London, and Beijing between July 30 and August 8,” Kohlberg said. “The whole idea is to allow people to watch at a convenient hour and make online donations toward artist relief. People can support different performers, or the whole project. Everybody gets a minimum of $1,000. The top three prize-winners will receive at least $2,500.”

While the competition jury is still in formation, the screening panel will include Kohlberg, his fellow Cleveland competition medalist Konstantin Soukhovetskiu, and pianists Álvaro Teixeira Lopes and Ursula Oppens. Paul Schenly will act as artistic advisor.

Yaron Kohlberg, who just took the reins of the Cleveland competition in 2018 and presided over the renaming of its parent organization — now Piano Cleveland — expressed his appreciation to everyone who has helped move the competition to next season and develop the new scheme for 2020.

“It’s been complicated moving everything to next year, and our excellent staff worked very diligently to make everything happen. We’re grateful to Ted Good and Catherine Good Brulport of Steinway Piano Gallery Cleveland, who connected us to the CEO of Steinway. He shared our vision for the virtual competition and came on board with the Steinway locations in Europe and Asia. And thanks to our board of directors for being so supportive of our ideas.”

Published on ClevelandClassical.com May 11, 2020.

The first such video, capturing the October 20 performance of Resilience at First Baptist Church in Shaker Heights, delivered handsomely on that promise. Erica Brenner’s sensitive videography and audio mixing preserved brilliant performances of music that illuminated two troubled periods in history: the plague of London in 1665, and the outbreaks of cholera and dysentery that dampened but failed to defeat the human spirit at the end of the American Civil War two centuries later. END_OF_DOCUMENT_TOKEN_TO_BE_REPLACED

The Diamond Brass Quintet opened Rocky River Chamber Music Society’s new season on Monday, October 12 with nobody in the pews at West Shore Unitarian Universalist Church. Like most performances these days, the concert was only attendable online. The players were widely-spaced on the stage, plexiglass shields were in place to cut down on aerosol transmissions, and the quintet took two intervals to go outdoors and let the air in the sanctuary refresh itself. (Rehearsals had been held outside as well.) END_OF_DOCUMENT_TOKEN_TO_BE_REPLACED

“Bewitched,” the first subscription concert of this season by Les Délices, can be summed up in one word: sensational. In her introductory remarks, director Debra Nagy talked about the “Embracing Change” theme of the season and completely rethinking the concert experience for streaming. The detailed planning was in evidence throughout the program. “Bewitched” was not just a concert; it was a carefully planned musical film, with elements of drama and music appreciation, all in support of the inspired program choices featuring Medea and Circe, two famous witches (or sorceresses, if you prefer) of classical antiquity. END_OF_DOCUMENT_TOKEN_TO_BE_REPLACED

END_OF_DOCUMENT_TOKEN_TO_BE_REPLACED

Though it had amassed a vast trove of audio over the decades, The Cleveland Orchestra has come late to the game in the video department. Even so, the organization wasn’t about to rush to produce the equivalent of home movies to keep its patrons engaged while live events were on hold. END_OF_DOCUMENT_TOKEN_TO_BE_REPLACED

END_OF_DOCUMENT_TOKEN_TO_BE_REPLACED

Although it wasn’t the original plan to go online last weekend for the final round of the James Stroud Classical Guitar Competition, moving to a digital format suited the event well. Young performers Aytahn Benavi, Patricia Hernandez, Ian Tubbs, and Eric Wang played in the intimate setting of their own homes, giving everyone who tuned in a front row seat. END_OF_DOCUMENT_TOKEN_TO_BE_REPLACED