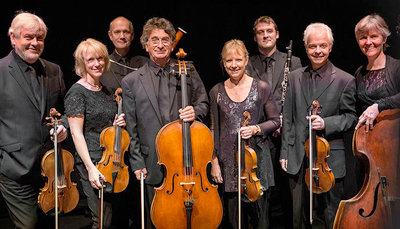 In the ten seconds that conclude the first movement of Antonín Dvořák’s Sextet in A, the world outside falls away. The players must sing out the first theme at full volume, slowing as though crossing a finish line—then, a moment of gut-wrenching tension gives way to a fading sunset of a chord. A merely excellent ensemble might pull out all the stops here. Yet the Academy of St. Martin in the Fields Chamber Ensemble, being the first-rate group of musicians they long have been, keep this moment incandescent while maintaining a sense of larger-scale trajectory. END_OF_DOCUMENT_TOKEN_TO_BE_REPLACED

Although the London-based Ensemble is celebrating its 50th year, “what many don’t know is that the Academy began as a chamber ensemble playing Baroque music in Neville Marriner’s living room,” violinist Harvey de Souza said by telephone from Northridge, California, where the Ensemble was in the middle of their North American tour. “At that time, people were into these huge massive forces performing Handel’s Messiah with a thousand-voice chorus and huge orchestras and I think he got tired of that. He wanted to get back to the purity of playing concerti grossi with a pair of violins, and that is how it all got started.” END_OF_DOCUMENT_TOKEN_TO_BE_REPLACED 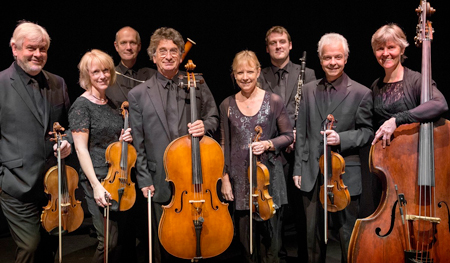 Northeast Ohio has had the pleasure of hearing London’s Academy of St. Martin in the Fields Chamber Ensemble twice in the past few months. Last May, eight string players from the Academy’s expandable and contractible large chamber music group visited the Tuesday Musical Series in Akron to play Brahms, Shostakovich, and Mendelssohn. Last Tuesday, a string quintet enhanced by three wind players opened the Cleveland Chamber Music Society’s 66th Season with Antonín Dvorak’s Quintet in G and Franz Schubert’s Octet in F. String Quartets are able to conjure up a vast palette of sonorities, but the addition of a double bass, clarinet, horn, and bassoon can increase the possibilities exponentially. END_OF_DOCUMENT_TOKEN_TO_BE_REPLACED

The ASMF chamber ensemble’s visit to Cleveland will be only the second stop on their current tour of North America. All told, the group will play fourteen concerts in nineteen days, beginning on October 5 in Dallas and ending on October 25 at Stanford University. In between, the musicians will perform in such far-flung cities as Clinton (NY), San Antonio, Houston, Memphis, Chicago, Columbus, Green Bay, Edmonton (Alberta), Reno, and Ashland (OR). END_OF_DOCUMENT_TOKEN_TO_BE_REPLACED 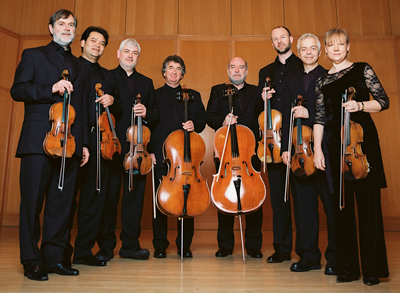 Ever since Haydn established the string quartet as the ensemble de rigueur, chamber music for strings has tended to operate in base four. There are many variants on the quartet (“4 ± n”, as a math teacher might write it), but even when you subtract a violin (Beethoven) or add a viola (Mozart), a cello (Schubert), or a double bass (Dvořák) — or, as in this concert, when you pump it up to a sextet (Brahms) or an octet (Mendelssohn, Shostakovich) — the quartet remains the norm. END_OF_DOCUMENT_TOKEN_TO_BE_REPLACED

Announcing the concert, TMA Executive Director Jarrod Hartzler said “the Academy of St. Martin in the Fields is one of the most recognized names in the classical music world, and rightly so. Their performances continually wow audiences, and I know that their Akron performance will be no different.” END_OF_DOCUMENT_TOKEN_TO_BE_REPLACED

END_OF_DOCUMENT_TOKEN_TO_BE_REPLACED

Rodgers & Hammerstein’s Cinderella was originally produced for television in 1957 — seven years after the animated Disney film was released — and starred Julie Andrews. According to the Rodgers & Hammerstein website, it was viewed by over 100 million people. END_OF_DOCUMENT_TOKEN_TO_BE_REPLACED

The story line has its origin in an 1855 play and an 1842 farce that Thornton Wilder mined for his 1938 play The Merchant of Yonkers. When that turned out to be a flop, in 1954 Wilder made the crucial decision to re-center the show around the character of the legendary marriage broker Dolly Gallagher Levi and renamed it The Matchmaker. END_OF_DOCUMENT_TOKEN_TO_BE_REPLACED

The Dodero Center for the Performing Arts at the Gilmore Academy in Gates Mills is one feature of an impressive campus. The auditorium is shallow, the stage is deep, and the ensemble played without a shell. Throughout the program, the sound, especially in instruments’ lower registers, tended to disappear. END_OF_DOCUMENT_TOKEN_TO_BE_REPLACED