The well-attended event in Warner Concert Hall, introduced by voice professor Salvatore Champagne, included nine mini-performances by distinguished singers who have passed through Mahy’s studio, video and in-person tributes, a surprise mass singing of Schubert’s An die Musik, and a reception in the Warner lobby. As the audience gathered, a slideshow of photos of students and colleagues from Mahy’s long career flashed across a big screen. END_OF_DOCUMENT_TOKEN_TO_BE_REPLACED 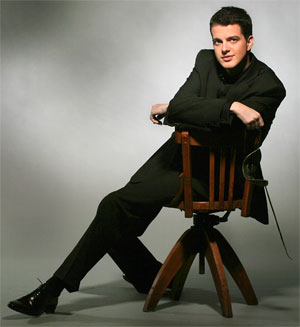 ClevelandClassical’s Oberlin intern Cree Carrico reached countertenor Philippe Jaroussky by phone the day before his Mixon Hall Recital at CIM in Cleveland on January 16. Jaroussky’s appearance with pianist Jerome Ducros was sponsored by Apollo’s Fire, who will bring him in for concerts next season.

Cree Carrico: I hear you’ve just come from New York where you made your Carnegie Hall debut yesterday.

PJ: Oh it was cool. I was in good form and the concert was in the small hall — that was very receptive. The hall had great sound and it was really a great concert. I am very happy and look forward to coming back.  You know sometimes as a musician you have some dreams. To perform at Carnegie, you think, it’s not for you, its impossible, and when its happening it’s a big joy. You have to enjoy each moment.

CC: How exciting. Will your Mixon Hall program be the same that you performed at Carnegie Hall?

PJ: Yes, absolutely. It will be the same program, a program of French songs. It’s quite strange for me that I’m doing my first recital at Carnegie and in Cleveland with repertory I’m not known for. Finally, its my French touch you know. When I did this program, I did a CD also and there were some very strong reactions. A lot of people in France say this repertoire isn’t appropriate for a countertenor voice. I did this program a lot outside of France, in Japan, in Brazil, in Germany, in England and finally here in the USA. Maybe here its more logical, because before I’m a countertenor, I’m a French musician. It’s not so stupid for you to invite me here and sing this repertory. END_OF_DOCUMENT_TOKEN_TO_BE_REPLACED

END_OF_DOCUMENT_TOKEN_TO_BE_REPLACED

The strings-only work by Berg has made relatively frequent appearances on the Orchestra’s programs. In 2021, the musicians recorded it for the In Focus series, and it appeared again on last year’s European tour. Friday’s rendition maintained the group’s characteristic light and effortless playing, each section blending as much as possible to echo the work’s original form as a string quartet. At fifteen minutes total, the piece is quite short, but the dense encoded musical meanings require some extra-attentive listening. Splitting up the three movements ensured that each one could be appreciated on its own. END_OF_DOCUMENT_TOKEN_TO_BE_REPLACED