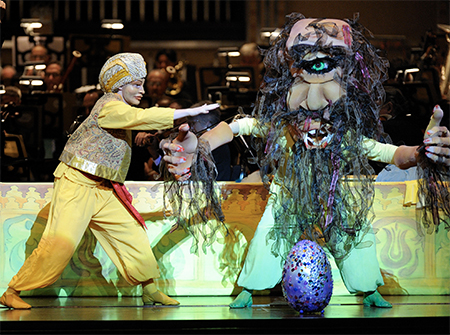 “When I think of introducing the classical music that we love to young kids, Scheherazade is one of the first pieces that comes to mind,” Cleveland Orchestra Assistant Conductor Vinay Parameswaran said during a telephone conversation. “Rimsky-Korsakov’s music vividly tells the story and it’s so easy to latch onto its dramatic elements. And if you’re hearing an orchestra for the first time, you get a sense of all the colors and sounds that it can produce.”

On Sunday, March 11 at 3:00 pm at Severance Hall, Parameswaran will lead a performance of Rimsky-Korsakov’s Scheherazade in a Cleveland Orchestra Family Concert with Enchantment Theatre Company. The production takes the audience to exotic lands on Sinbad’s ship with the help of costumes, magic, and puppets. Tickets are available online.

Parameswaran said that pairing the music with acting, dancing, and visuals adds a beautiful narrative element that helps to tell the story without any speaking. “The great thing is that the audience will be able to hear Scheherazade without interruption, so they will get a sense of the combined music and drama.” Prior to the performance, the orchestra will play excerpts from what the audience will hear.

END_OF_DOCUMENT_TOKEN_TO_BE_REPLACED

The Cleveland Orchestra Family Concert on Sunday afternoon, March 5 was a delight. The program, titled “The Magic Firebird,” was a collaboration between the Orchestra and the Enchantment Theatre Company. Guest conductor Ruth Reinhardt led Stravinsky’s The Firebird with precision, commenting briefly on each piece and drawing in the young audience. The concert was a terrific success despite limited space onstage. END_OF_DOCUMENT_TOKEN_TO_BE_REPLACED

Jackson began the program with a recitation of Langston Hughes’ poem “Helen Keller” — the first of five poems by Hughes that served as interludes between each piece on the first half. END_OF_DOCUMENT_TOKEN_TO_BE_REPLACED

Pianos with pins and tape on strings, a bass drum and tam tam, crotales, Almglocken, and vibes. Microphones were hooked up all around the instruments. The feed was sent to speakers around the room. Lighting designer Nicholas Houfek hung incandescent globes over the arrangement of instruments from thin black wires stretching across the beams. END_OF_DOCUMENT_TOKEN_TO_BE_REPLACED

From the podium, Elim Chan set an ambitious tone for the evening. The rising star conductor, here in her Cleveland Orchestra debut, has a commanding style, and every twist and turn in Saturday’s performance tracked closely with her baton. END_OF_DOCUMENT_TOKEN_TO_BE_REPLACED