Like all great drama, Johann Sebastian Bach’s Passions — his settings of the gospel accounts of Jesus’s crucifixion — present conflicting points of view. We see the Passion through so many characters in the story — the disciple Peter, who denies knowing Jesus; the conflicted Roman governor Pilate, who finds no guilt in Jesus and yet sends him to the cross; the angry crowd, which demands his crucifixion; and Jesus himself, suffering and yet transcending his suffering. At every point, Bach demands our involvement with the conflicting ways in which each of these actors interpret the crucial event of the Christian story. END_OF_DOCUMENT_TOKEN_TO_BE_REPLACED 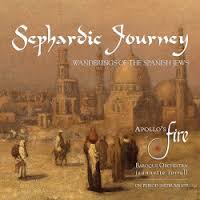 Musicians touring foreign lands might absorb traces of a region’s musical vocabulary. But Sephardic Jews didn’t have much of a choice after their expulsion from what is now Israel around 700 BCE and from Spain in 1492. Encountering hostility everywhere they settled, Spain’s Jews spent centuries searching for a new home. They carried their prayers and songs with them as they traveled across the Iberian Peninsula, the Middle East, and the Mediterranean. END_OF_DOCUMENT_TOKEN_TO_BE_REPLACED 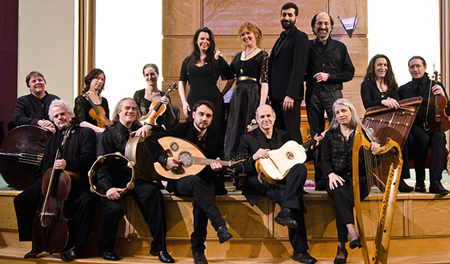 One of the most remarkable elements of mankind is its ability to endure. History is filled with stories of people struggling, failing, succeeding, and surviving, but few have endured the centuries of exile and forced displacement experienced by the Jews. Performing an inspired program devised by artistic director Jeannette Sorrell, soprano Nell Snaidas, baritone Jeffrey Strauss, and cellist René Schiffer, Apollo’s Fire gave a sensational concert on February 5 at St. Paul’s Church in Cleveland Heights. END_OF_DOCUMENT_TOKEN_TO_BE_REPLACED

“It seemed like this was the next challenge,” said Apollo’s Fire artistic director Jeannette Sorrell before the orchestra’s 2014 debut performances of Sephardic Journey: Wanderings of the Spanish Jews. “Our Celtic program in particular made me ready to tackle something new.”

Apollo’s Fire, Cleveland’s Baroque orchestra, opened a two-night revival of their Christmas show Sacrum Mysterium: A Celtic Christmas on Saturday, December 12, at the First Baptist Church in Shaker Heights. It was an unseasonably warm December evening, with every window in the church open to cool the capacity audience. END_OF_DOCUMENT_TOKEN_TO_BE_REPLACED

I began by asking about Apollo’s Fire’s debut at the Berkshire Music Center at Tanglewood in Lenox, Massachusetts. “It was really fun,” Sorrell said. “We had no idea that we were going to be sold out at Tanglewood. It was really a personal homecoming because I had studied in the conducting class there back in 1989 and I have such moving memories of that summer working with Leonard Bernstein and Roger Norrington. END_OF_DOCUMENT_TOKEN_TO_BE_REPLACED

Apollo’s Fire’s “Fireside Concerts” this season gather audiences around the hypothetical hearth of the Bach family in Leipzig (before moving on to Zimmermann’s Coffee House). Music by Johann Christian (1735-1782) Wilhelm Friedmann (1710-1784) and Papa Bach himself feature the talented members of the ensemble’s Young Artist Apprentice Program performing alongside AF regulars, with a special appearance by three even younger members of Apollo’s Musettes. END_OF_DOCUMENT_TOKEN_TO_BE_REPLACED

Bach penned his Kaffee-Kantate to be performed by the Leipzig Collegium Musicum at a Leipzig coffee emporium, possibly Zimmerman’s, where the composer’s student ensemble was a regular fixture. After the patrons are called to order by a narrator, Herr Schlendrian storms in, roaring like a bear over his daughter’s fascination with the caffeinated brew, which is all the rage among the younger set in Leipzig. Lieschen responds with an elaborate ode to coffee, and the conversation, or shall we say family argument, continues from that point. Artistic Director Jeannette Sorrell, who has provided a new English translation, will direct the mini-drama with tenor Corey Shotwell as narrator and bass-baritone Jeffrey Strauss as Schlendrian. END_OF_DOCUMENT_TOKEN_TO_BE_REPLACED

When you’re taking the risk of performing Handel’s most celebrated oratorio from end to end, you need to field a quartet of soloists with alluring personalities, bring together a stellar chorus and orchestra, and be able to count on your own fine sense of pacing — otherwise this two-and-a-half hour work could become tedious soon after the “Hallelujah” chorus. Jeannette Sorrell and Apollo’s Fire had all of these elements securely in place on Saturday night at First Baptist Church in Shaker Heights. Its version of Messiah — presented with a sense of theater, as Handel intended it to be — scintillated, charmed and inspired the large audience from Overture to “Amen.” END_OF_DOCUMENT_TOKEN_TO_BE_REPLACED

Apollo’s Fire will present seven local subscription programs totaling thirty concerts during its 23rd season in 2014-2015. Additionally, Cleveland’s baroque orchestra will make its debut at New York’s Metropolitan Museum of Art in December and at London’s BBC Proms next August, undertake a national tour of Monteverdi’s 1610 Vespers in November, and appear on the Pittsburgh Renaissance & Baroque Society series in April. END_OF_DOCUMENT_TOKEN_TO_BE_REPLACED

The Diamond Brass Quintet opened Rocky River Chamber Music Society’s new season on Monday, October 12 with nobody in the pews at West Shore Unitarian Universalist Church. Like most performances these days, the concert was only attendable online. The players were widely-spaced on the stage, plexiglass shields were in place to cut down on aerosol transmissions, and the quintet took two intervals to go outdoors and let the air in the sanctuary refresh itself. (Rehearsals had been held outside as well.) END_OF_DOCUMENT_TOKEN_TO_BE_REPLACED

“Bewitched,” the first subscription concert of this season by Les Délices, can be summed up in one word: sensational. In her introductory remarks, director Debra Nagy talked about the “Embracing Change” theme of the season and completely rethinking the concert experience for streaming. The detailed planning was in evidence throughout the program. “Bewitched” was not just a concert; it was a carefully planned musical film, with elements of drama and music appreciation, all in support of the inspired program choices featuring Medea and Circe, two famous witches (or sorceresses, if you prefer) of classical antiquity. END_OF_DOCUMENT_TOKEN_TO_BE_REPLACED

END_OF_DOCUMENT_TOKEN_TO_BE_REPLACED

Though it had amassed a vast trove of audio over the decades, The Cleveland Orchestra has come late to the game in the video department. Even so, the organization wasn’t about to rush to produce the equivalent of home movies to keep its patrons engaged while live events were on hold. END_OF_DOCUMENT_TOKEN_TO_BE_REPLACED

END_OF_DOCUMENT_TOKEN_TO_BE_REPLACED

Although it wasn’t the original plan to go online last weekend for the final round of the James Stroud Classical Guitar Competition, moving to a digital format suited the event well. Young performers Aytahn Benavi, Patricia Hernandez, Ian Tubbs, and Eric Wang played in the intimate setting of their own homes, giving everyone who tuned in a front row seat. END_OF_DOCUMENT_TOKEN_TO_BE_REPLACED