The Kalichstein-Laredo-Robinson trio, this season’s Kulas Visiting Artists, brought the Kent Blossom Music Festival faculty series to a memorable conclusion on Wednesday evening, July 31 in Ludwig Recital Hall on the Kent State campus. This group qualifies as a legacy ensemble — they’ve played together since Jimmy Carter’s inauguration in 1977 — but they continue to perform with fire and authority. Playing to a large crowd on Wednesday, they no doubt inspired KBMF students as much as they delighted the general public. END_OF_DOCUMENT_TOKEN_TO_BE_REPLACED

The Kalichstein-Laredo-Robinson Trio (pianist Joseph Kalichstein, violinist Jaime Laredo, and cellist Sharon Robinson) will present the last of five faculty concerts in the Kent Blossom Music Festival Series on Wednesday, July 31 at 7:30 pm in Ludwig Recital Hall on the Kent State campus. Named the Kulas Visiting Artists for this year’s Festival, the Trio will perform music by Previn, Ravel, and Mendelssohn. Tickets are available online.

The KLR Trio enjoyed a distinguished debut as an ensemble more than four decades ago, having been invited to perform at the White House in 1977 as part of the inauguration festivities for President Jimmy Carter. (Joseph Kalichstein reminisced about that event in an interview for this publication in October of 2012).

I reached Sharon Robinson and Jaime Laredo by telephone at their home in Cleveland, where they both teach at the Cleveland Institute of Music, to chat about their Kent program. I began by asking them about André Previn’s Piano Trio No. 2, which the ensemble commissioned and debuted during their 2012-2013 season, and which they’ve brought back recently. END_OF_DOCUMENT_TOKEN_TO_BE_REPLACED

“Our faculty concert series will feature fantastic artists from The Cleveland Orchestra, Kent State’s revered faculty, the Miami String Quartet, pianist Spencer Myer and other guest artists,” Festival director Ricardo Sepúlveda said in his letter introducing this year’s season. For these musicians, their tenure at Kent Blossom is more than just performance based — they’ll be working closely with the 43 visiting students accepted this year.  END_OF_DOCUMENT_TOKEN_TO_BE_REPLACED 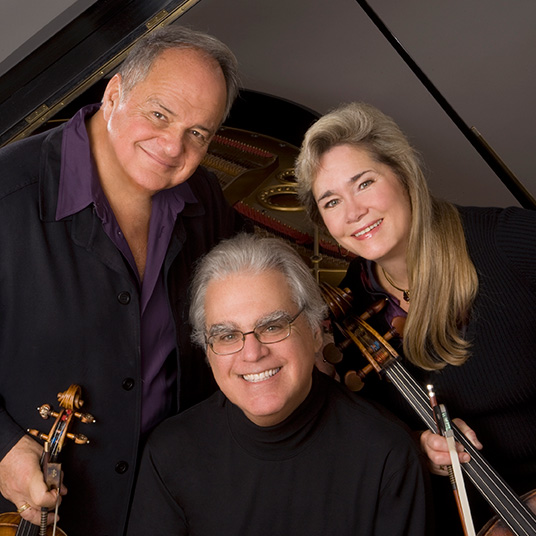 Many a fledgling chamber ensemble has launched its career with a house concert, but few have done that at so prestigious an address as 1600 Pennsylvania Avenue NW, Zipcode 20500. The Kalichstein-Laredo-Robinson Trio, who did make their debut at the White House, will open this season’s Mixon Masters Series at the Cleveland Institute of Music on Tuesday, October 17 at 8 pm with Beethoven’s Trio in G, op. 1, no. 2, André Previn’s Trio No. 2 (commissioned by the group), and Brahms’ Trio in B, op. 8.

Pianist Joseph Kalichstein was born in Israel and came to the US in 1962 to study at Juilliard. He rose to prominence after winning the Young Concert Artists Auditions and making his debut with Leonard Bernstein and the New York Philharmonic in a televised performance of Beethoven’s fourth concerto. After winning the Levintritt Prize in 1969, he made his Cleveland debut with George Szell and The Cleveland Orchestra in that same work. This season, he celebrates the 35th anniversary of the founding of the KLR Trio. We reached Joseph Kalichstein at his home in New Jersey to ask about the Mixon Hall concert and how he first got together with violinist Jaime Laredo and cellist Sharon Robinson.

Daniel Hathaway: Is it true that Jimmy Carter was the matchmaker who formally brought the KLR Trio together?

Joseph Kalichstein: Yes, absolutely. One of his better accomplishments, I think. END_OF_DOCUMENT_TOKEN_TO_BE_REPLACED

END_OF_DOCUMENT_TOKEN_TO_BE_REPLACED

What was that strange din coming over the live feed from Ludwig Recital Hall on Friday evening, July 23, as the Miami String Quartet filed onstage to play the third faculty recital of the Kent Blossom Music Festival? Accustomed as we were during the pandemic ban on live audiences to hearing the sound of no hands clapping, it was both startling and thrilling to witness a large crowd putting their hands together to welcome one of the Festival’s perennial favorites back for an in-person performance. END_OF_DOCUMENT_TOKEN_TO_BE_REPLACED

Practical reasons aside, there aren’t many ensembles who can put together an all-Mozart evening as elegantly as The Cleveland Orchestra. END_OF_DOCUMENT_TOKEN_TO_BE_REPLACED