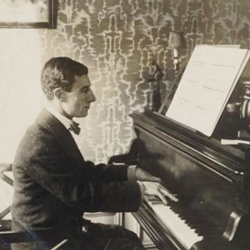 Thanks to Serge Diaghilev, his Ballets Russes, and the young Russian composer Igor Stravinsky, Paris in the four years just before the Great War has to count as one of the most exciting eras for a balletomane to be alive.

Tucked in between Petrushka and Sacre, on June 18, 1912, came the premiere of Maurice Ravel’s Daphnis et Chloé, completing four straight years of landmark events in the world of dance. END_OF_DOCUMENT_TOKEN_TO_BE_REPLACED

view at The Maltz Museum of Jewish Heritage is Bezalel on Tour, an exhibition that celebrates the 106th anniversary of Bezalel Academy of Arts and Design, Israel’s oldest institute of higher education and a leading international academy of art, design and architecture. On Wednesday, December 12, members of the No Exit New Music Ensemble and guest performers presented an engaging concert of music by Shulamit Ran, Morton Feldman, Andrew Rindfleisch and Corey Rubin, all of whom are Jewish and/or Israeli composers.

The only non-Jewish composer represented on the program was Maurice Ravel, whose setting of Kaddish, arranged for cello and piano by Nick Diodore, was given a heartfelt performance by Diodore and pianist Nick Underhill to open the program. For some reason it seems as though the area has recently enjoyed a number of recitals of works for solo cello; Diodore continued the program with a vibrant performance of the first and second movements of Ernst Bloch’s Second Suite for Cello. END_OF_DOCUMENT_TOKEN_TO_BE_REPLACED

Jackson began the program with a recitation of Langston Hughes’ poem “Helen Keller” — the first of five poems by Hughes that served as interludes between each piece on the first half. END_OF_DOCUMENT_TOKEN_TO_BE_REPLACED

Pianos with pins and tape on strings, a bass drum and tam tam, crotales, Almglocken, and vibes. Microphones were hooked up all around the instruments. The feed was sent to speakers around the room. Lighting designer Nicholas Houfek hung incandescent globes over the arrangement of instruments from thin black wires stretching across the beams. END_OF_DOCUMENT_TOKEN_TO_BE_REPLACED

From the podium, Elim Chan set an ambitious tone for the evening. The rising star conductor, here in her Cleveland Orchestra debut, has a commanding style, and every twist and turn in Saturday’s performance tracked closely with her baton. END_OF_DOCUMENT_TOKEN_TO_BE_REPLACED