Johann Sebastian Bach’s Mass in B Minor is, to say the least, a daunting work. It’s full of challenging vocal and instrumental parts that seem to venture into every key in the theory book. It’s composed of one complicated counterpoint after another. And like any sung mass, its musical integrity can seem at odds with the liturgical functions of the texts. And it’s long (over two hours). In its recent embodiment at Oberlin’s Baroque Performance Institute (BPI), all of these challenges seemed to disappear. END_OF_DOCUMENT_TOKEN_TO_BE_REPLACED 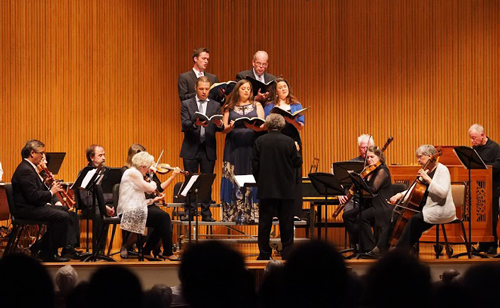 The work’s history is complicated, as Bach originally wrote the “Kyrie and Gloria,” “Sanctus,” and “Crucifixus” earlier in his career for different purposes. Though the composer was nearly blind in his last years, he revised these movements accordingly and completed the work in 1749, only a year before his death. END_OF_DOCUMENT_TOKEN_TO_BE_REPLACED

END_OF_DOCUMENT_TOKEN_TO_BE_REPLACED

Supported by engagingly, yet simple staging by Cara Consilvio, a well-prepared cast of singers told the archetypal story of Cinderella with charm and flair. Framing the production was  a sparse but colorful set and wonderful lighting by Dave Brooks. END_OF_DOCUMENT_TOKEN_TO_BE_REPLACED