Johann Sebastian Bach’s Mass in B Minor is, to say the least, a daunting work. It’s full of challenging vocal and instrumental parts that seem to venture into every key in the theory book. It’s composed of one complicated counterpoint after another. And like any sung mass, its musical integrity can seem at odds with the liturgical functions of the texts. And it’s long (over two hours). In its recent embodiment at Oberlin’s Baroque Performance Institute (BPI), all of these challenges seemed to disappear. With virtuosic ease, contrapuntal clarity, and a comprehensive trajectory that linked music and text, the performance of this great work on July 1 in Warner Concert Hall was among the finest that I could imagine.

Much of the credit goes to conductor Kenneth Slowik, who expertly paced the host of choruses, arias, and duets, giving the whole an overarching trajectory. Slowik, an accomplished cellist and gambist who is Artistic Director of the Smithsonian Chamber Music Society and a faculty member of the University of Maryland, has been Artistic Director of BPI since 1993.

Slowik’s tempos were for the most part brisk, but he allowed plenty of opportunity for reflection in the slower parts. The opening “Kyrie” and the concluding “Dona Nobis Pacem” — each deliberate in tempo — served as profound cornerstones for this fascinatingly complex Baroque edifice.

The “chorus” consisted of only eight singers, singing one-to-a-part (except for very occasional doublings). This approach to Bach, hotly debated by musicologists when first presented in the early 1980s, has now become accepted as a plausible representation of choral singing in Bach’s time. More importantly, historical performance groups have recognized that using soloists instead of multiple singers brings clarity, balance, and excitement to the work. 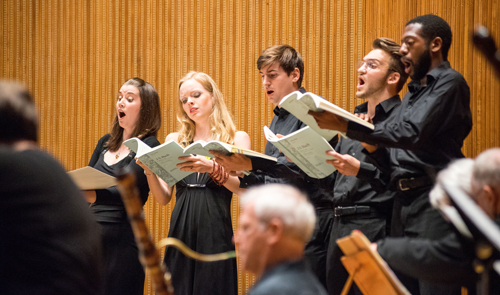 The choral sections, usually for five voices, were distributed among the eight singers, allowing some of them a chance to rest. They certainly needed some vocal downtime, given that they had to sing not only the choruses but also the very demanding arias and duets.

In the hands of such accomplished singers, the long melismas (elaborate sequences of notes on one syllable) take on a crisp presence, shedding the muddiness that can result when sung by a large group. With a few strong voices, the vocal parts are much more effectively balanced against the orchestra. And then there is that astonishing energy that comes from a single voice holding down the whole part!

Among this excellent vocal octet, soprano Molly Netter’s clear, expressive voice was a stand-out in duets and choruses, especially in the treble-friendly acoustics of Warner Concert Hall. Sara Casey, second soprano in many of the choruses, nicely ornamented the runs and trills in her “Laudamus Te.” Alto Robin Bier alternated choral parts with countertenor Nathan Medley; Bier’s particularly moving singing of the “Agnus Dei” was matched by violinist Robert Mealy and expressive organ continuo by Webb Wiggins.

BPI faculty, with some advanced students, constituted the excellent Baroque orchestra. Though most of them had been teaching all day for two weeks in the grueling BPI schedule while rehearsing in the evenings, they played with tireless energy and commitment. 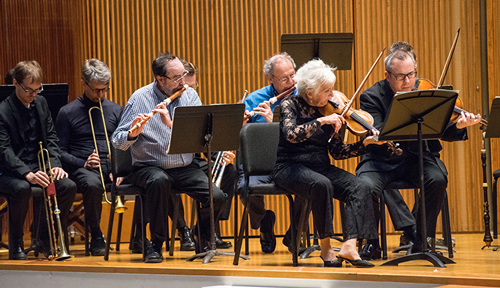 As might be expected, the string section had a lot to do, and did it superbly. Playing along with McDonald were violinists Robert Mealy (concertmaster for the second half), Cynthia Roberts and Julie Andrijeski, and violist Jane Starkman.

The trumpeters John Theissen, Steven Marquardt, James Leach, and Robert Apple were splendid in their high, ringing celebratory tones. Timpanist Thomas Jones played with verve and sensitivity — you could almost hear the words being sung in his lines. 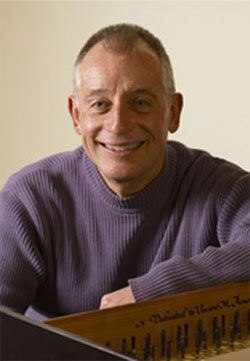 A dedicatory note in the program offered the concert in honor of Wiggins (pictured above), who is retiring from the Oberlin faculty. It rightly noted the centrality of his insight and energy in producing this performance. An event like this does not happen on its own: bravo to Slowik, Wiggins, and all for making it possible!

END_OF_DOCUMENT_TOKEN_TO_BE_REPLACED

Franz Welser-Möst led the final bows on Saturday night at Severance, like the star of any show should. The Cleveland Orchestra’s music director is in his element presiding over the ensemble’s annual opera production, which this season packs the drama. Verdi’s Otello — in a concert staging that opened May 21 and runs for two more performances (May 26 and 29) — demands big voices, instrumental forces to match, and a conductor who can give it all shape and direction. END_OF_DOCUMENT_TOKEN_TO_BE_REPLACED

The cimbalom was the feature of the show, an instrument capable of taking on many personas. Its performer, Chester Englander, has shaped his career around the instrument, and has inspired composers to write more repertoire for it, some of which was presented on the program. END_OF_DOCUMENT_TOKEN_TO_BE_REPLACED