On Sunday, January 25, the Cleveland Museum of Art will present organist Karel Paukert, former and long-time curator of musical arts at the museum, in a special recital in Gartner Auditorium. To mark his 80th birthday Paukert will revisit a work that he has played “at least annually” for decades, Olivier Messiaen’s La Nativité du Seigneur (“The Birth of Christ”).

In December of 2008, shortly after the launch of ClevelandClassical.com, we interviewed Karel Paukert about his forthcoming January performance of the Messiaen work at St. Paul’s Episcopal Church in Cleveland Heights. That performance observed the centenary of the famous French composer’s birth. Paukert’s reflections on La Nativité and on his own career, reprinted below, remain highly relevant six years later.

Born in Prague, Karel Paukert came to the US by way of Reykjavík and Belgium. He taught and played organ in St. Louis and Evanston, IL before becoming a US citizen in 1972 and curator of musical arts at the Cleveland Museum of Art in 1974. During his thirty years in that post he played more than 800 organ recitals, administered two highly respected concert series, founded the Aki Festival of new music and arranged for the personal appearance of Olivier Messiaen and Yvonne Loriod in Cleveland in 1978. END_OF_DOCUMENT_TOKEN_TO_BE_REPLACED 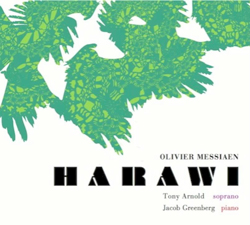 Olivier Messiaen is unique in music history. He is perhaps the most intensely religious composer since J.S. Bach, despite living in the 20th century, when most artists and intellectuals abandoned faith. Yet his belief was anything but orthodox: sensual love and sacred mystery mix on a cosmic scale.

He was synesthetic, so that he heard chords as colors. And he originated total serialism, where pitches and rhythms are standardized, so that a specific note will always have the same articulation and duration in a piece. Serialism became the predominant compositional method during the 1950s. It is some of the most difficult and maligned music existent, but Messiaen’s use of it is comprehensible and attractive.

The solo piano piece Cantéyodjayâ (1949), with which pianist Jacob Greenberg opens his and soprano Tony Arnold’s excellent new CD of the song cycle Harawi (New Focus Recordings), is a case in point. END_OF_DOCUMENT_TOKEN_TO_BE_REPLACED 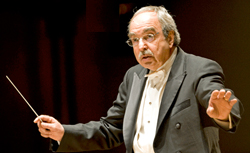 “Beethoven’s Mass in C is a wonderful piece and under-performed in my opinion — at least in this country,” Cleveland Orchestra Director of Choruses Robert Porco told us by telephone. “And I don’t know exactly why that is. People like to do the Missa Solemnis, which is an entirely different kind of piece and was written some fifteen years later.”

The Mass in C was commissioned by Prince Nikolaus Esterházy II. “He was the same person for whom Haydn wrote his wonderful masses. I only mention this because the late Haydn masses are not performed that often either.”

According to history, Esterházy did not like the work — which caused Beethoven to leave abruptly. “Esterházy wrote letters about how much the piece embarrassed him. People have asked me why he thought that and I can’t really answer that either except that he was very accustomed to hearing what Haydn had written.” In his The Life of Beethoven, (1998) musicologist David Wyn Jones recounts, “Nikolaus later wrote to Countess Henriette Zielinska, ‘Beethoven’s music is unbearably ridiculous and detestable; I am not convinced it can ever be performed properly. I am angry and ashamed.'” END_OF_DOCUMENT_TOKEN_TO_BE_REPLACED

Northeast Ohio’s Les Délices has long been that rarest of beasts: a world-class organization so proud of its region (ours) and repertoire (distinct niches in pre-1800 music) that it never tries to be everything to everyone, paradoxically making a strong case for a broad, curious international following. In the December episode of its SalonEra series, the ensemble embraces its strengths and community to marvelous effect. END_OF_DOCUMENT_TOKEN_TO_BE_REPLACED

END_OF_DOCUMENT_TOKEN_TO_BE_REPLACED

Another I remember fondly is Gian Carlo Menotti’s Amahl and the Night Visitors.  Commissioned by NBC, the one act, made-for-television opera, premiered on December 24, 1951, at the network’s studios in New York’s Rockefeller Center. And now, through the wonders of technology, Cleveland Opera Theater has created a magical new production of the work which is available on demand through January 6, 2021 (Three Kings Day). END_OF_DOCUMENT_TOKEN_TO_BE_REPLACED

Jessen has now followed up with her second solo CD, Winter Chapel. Recorded on January 17, 2020 in Oberlin College’s Fairchild Chapel and available on Carrier Records, the album is a continuum in Jessen’s journey to push the musical boundaries of her instrument and herself as an improviser. END_OF_DOCUMENT_TOKEN_TO_BE_REPLACED