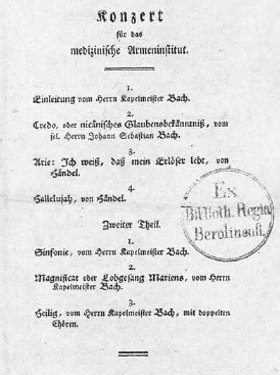 That concert, given in support of a medical institute for the poor, began with what seems to have been the first ever performance of the Credo from Johann Sebastian Bach’s Mass in b minor. C.P.E. Bach provided the Credo with a brief, new introduction and slightly adapted it to a new age when instruments like the oboe d’amore had become obsolete and needed to be replaced (in this case by violins). END_OF_DOCUMENT_TOKEN_TO_BE_REPLACED

Well before the more pietistic style of Lutheran church music that Johann Sebastian Bach wrote at Leipzig in the second quarter of the eighteenth century came the Italian-influenced, Renaissance style of Michael Praetorius, the subject of Jeannette Sorrell’s well-crafted and expertly performed Christmas Vespers with Apollo’s Fire, which began a four-concert run at Trinity Cathedral on Friday evening before moving on to three different venues around town.

You could hear the difference in approach in Philip Nicolai’s Wachet auf! Everyone knows the glorious, equal-note setting that ends Bach’s cantata of the same name. Not so familiar is the early form of the chorale tune with its dancelike, uneven rhythms, nor its delightful and ornate elaboration by Praetorius from his 1619 collection Polyhymnia caduceatrix. The latter, already bursting at its seams with exuberance, was decorated even further by Apollo’s Fire’s violinists and cornetto players (Olivier Brault, Johanna Novom, Kiri Tollaksen and Nathaniel Cox), who could barely force themselves to arrive at the final chord at several cadences. END_OF_DOCUMENT_TOKEN_TO_BE_REPLACED

In her program notes for this week’s concerts Apollo’s Fire artistic director Jeannette Sorrell writes, “Martin Luther had many students and disciples. One of them was named Praetorius, and that student had a son named Michael. Michael became – along with J.S. Bach – one of the two greatest composers in the history of Protestant church music.” Beginning on Friday, December 13 with performances continuing through the 16th at locations in Cleveland and Akron, Apollo’s Fire presents Praetorius Christmas Vespers: A Dramatic Holiday Celebration.

Compiled by Jeannette Sorrell and premiered in December 2005, the Christmas Vespers features the splendor of trumpets, sackbuts, virtuoso cornettos, antiphonal choirs, lutes, strings and recorders. The concerts also feature the Apollo’s Singers and the Apollo’s Fire Musettes, youth who have been chosen by Sorrell to perform Praetorius’s music intended for children’s voices. Returning to Cleveland and the Apollo’s Fire stage are three renowned soloists, sopranos Nell Snaidas, Teresa Wakim, and Amanda Powell.

“I’m in love with the German music of this time period, and there’s something about this Christmas Vespers that Praetorius wrote and Jeannette put together. END_OF_DOCUMENT_TOKEN_TO_BE_REPLACED

The cimbalom was the feature of the show, an instrument capable of taking on many personas. Its performer, Chester Englander, has shaped his career around the instrument, and has inspired composers to write more repertoire for it, some of which was presented on the program. END_OF_DOCUMENT_TOKEN_TO_BE_REPLACED

You wouldn’t expect that acoustic from a glance at the nave, which is wide and long, but not especially lofty. But when I guest conducted a local amateur choir and professional orchestra in Beethoven’s Mass in C there a few years back, during the first rehearsal we released the final chord of the “Gloria” and listened in astonishment for the next several seconds. The sound continued to roll down the space like the big wave that surfers dream about. END_OF_DOCUMENT_TOKEN_TO_BE_REPLACED