A graduate of University School and the Cleveland Institute of Music, Chad Hoopes first burst onto the international music scene after winning the Young Artists Division of the Yehudi Menuhin International Violin Competition. Since that time, he has gone on to perform with many of the world’s distinguished orchestras — his recent highlights include debuts with L’Orchestre de Paris, the Philadelphia Orchestra, the National Symphony, and Konzerthausorchester Berlin. In 2013 he received the Cleveland Arts Prize Emerging Artist Award, and in 2017 was honored with an Avery Fisher Career Grant.

In 2014, Hoopes became a member of CMS Two, a program designed to nurture musicians who are in the early stages of major careers. “The roster includes the finest young chamber musicians around,” Hoopes said, “so it’s a real honor to be on that list. In fact, except for Wu Han, everyone playing on next week’s concert is part of CMS Two.” 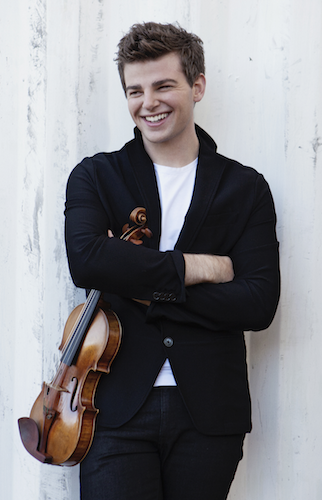 Hoopes said he is excited about performing Dvořák’s Piano Quintet in A on Tuesday. “It’s one of my favorite chamber works. The entire piece is so charming and I’m looking forward to this collaboration. It’s a fantastic group of people, so there’s a wholehearted, energetic approach to it. I love Dvořák. His music always has a sense of expressiveness and lyricism and this piece has a nice mix of those two things. I think what speaks to me most are the different folk elements, especially the third-movement Bohemian folk dance.”

When asked about receiving his Avery Fisher Career Grant, the violinist said the award came at the perfect time. “I bought my own violin this past year, which I am very excited about. Basically the entire grant helped me do that. It’s by a maker who lives in Brooklyn, Samuel Zygmuntowicz. He made it in 1991 for Isaac Stern, so it’s a pretty cool thing.”

Hoopes said he had been thinking about purchasing an instrument for some time because he wanted the freedom that comes with ownership. “I was playing on a very beautiful Stradivarius about eight years, but I was in a phase of my life where I didn’t want to be dependent on a wealthy donor for an instrument, with all the strings that are attached. And you can’t buy a Stradivarius, they’re almost unobtainable.”

Hoopes and Zygmuntowicz had a fortuitous meeting at a CMS event. “Sam was there and he happened to have this violin with him, so invited me to try it and I did. It was love at first sight. I was drawn to it immediately. I feel very lucky and every day I think about how much I love this violin. To put it simply, when you have your own instrument you can sleep so much better at night.”

In 2016 Hoopes had the honor of being named the Munich Symphony Orchestra’s first Artist in Residence. “It’s a fantastic orchestra I had played with several times. During the residency year I played three separate programs — the John Adams concerto, Mozart 5, and the Tchaikovsky. I also did a bit of outreach. It was a special moment for me because my teacher Ana Chumachenco lives there and I still play for her. I love Munich. I have many friends there and it’s one of my favorite cities, so it was a fun residency.”

The CMS tour stop in Akron will also provide Hoopes an opportunity to visit family and friends in Cleveland. “I’m so excited to be back for this concert — it will be nice to be home for a few days in the middle of this big tour. There’s a special place in my heart for Cleveland. I owe so much to my time at CIM studying with David Cerone and all the people who made such an influence on my life, both as a violinist and as a human. I think what is so special about Cleveland is that we have one of the greatest orchestras in the world, and a wonderful museum and educational institutions. And to be able to go home and eat some of the greatest food you’ll find anywhere is awesome. What can I say? I love the city and hope to be able to live there again someday because it is a great place to be.”

END_OF_DOCUMENT_TOKEN_TO_BE_REPLACED

The strings-only work by Berg has made relatively frequent appearances on the Orchestra’s programs. In 2021, the musicians recorded it for the In Focus series, and it appeared again on last year’s European tour. Friday’s rendition maintained the group’s characteristic light and effortless playing, each section blending as much as possible to echo the work’s original form as a string quartet. At fifteen minutes total, the piece is quite short, but the dense encoded musical meanings require some extra-attentive listening. Splitting up the three movements ensured that each one could be appreciated on its own. END_OF_DOCUMENT_TOKEN_TO_BE_REPLACED