As organizations gingerly take steps to open up for business, it’s refreshing to have new content to listen to and write about after a solid six months of archival footage. But only one of these three — “Music by Three B’s” at Trinity Cathedral — was performed in real time. Daniel Shapiro pre-recorded his challenging all-Beethoven program not at Christ Episcopal Church in Hudson, but at the Steinway Galleries. And baritone Michael Kelly and guitarist David Leisner taped an interesting arrangement of Schubert’s Die Schöne Müllerin in a studio in New York.

Daniel Shapiro made an impressive experience out of the first recital in his season-long traversal of Beethoven’s 32 Piano Sonatas on Sunday, September 13, also the opening event of Music From The Western Reserve. Keeping opus numbers together as he plans to do throughout the cycle, he tackled the three virtuosic works in Op. 2, then fast-forwarded to the Op. 90 sonata.

When he embarked on composing those first three sonatas, Beethoven was out to prove his capabilities as a hotshot young virtuoso, and playing them end to end is a challenge for any pianist. Shapiro made clean work of the task, ending the third with plenty of interpretational energy left over to devote to the two movements of Op. 90 — a work more cerebral than digital. 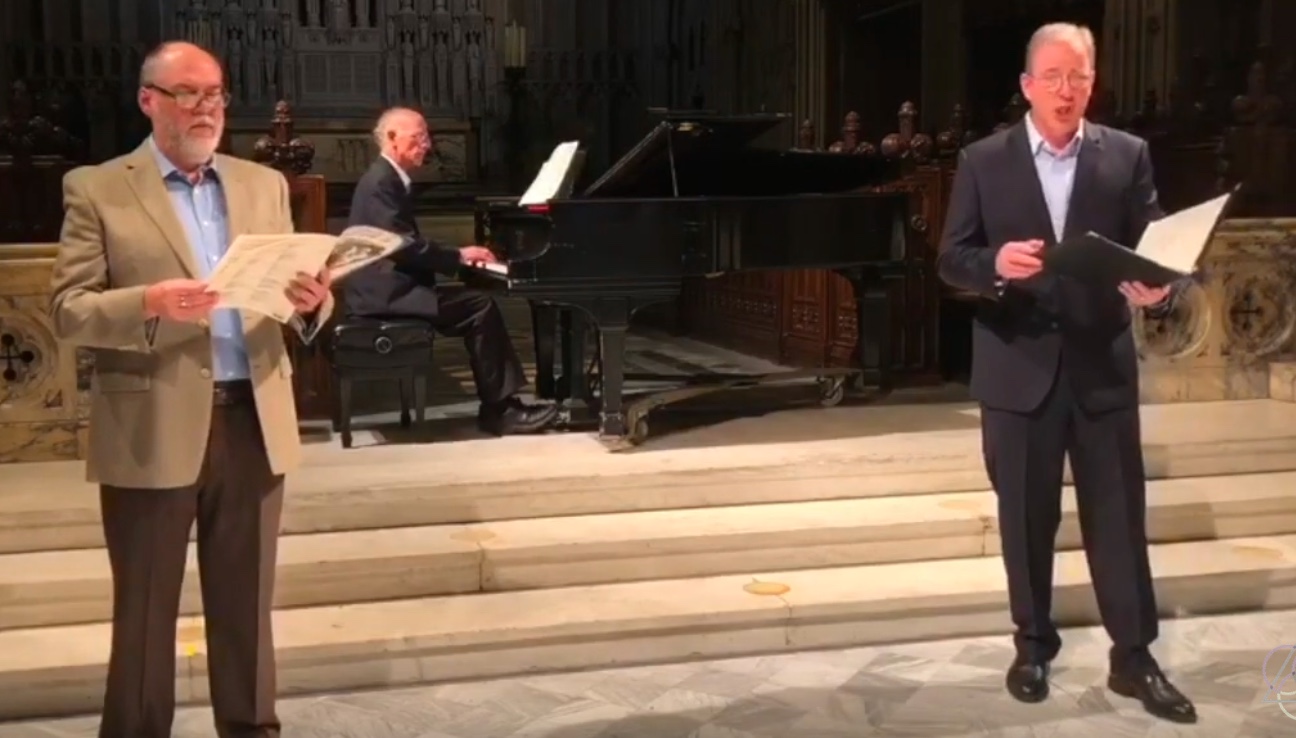 The action shifted to the crossing of the empty cathedral for Brahms’ A-Major Violin Sonata, played masterfully by Brownbag Concert regulars Andrew Sords and pianist Elizabeth DeMio — at a healthy distance apart, the piano at chancel level, violinist on the nave floor. A charming Fritz Kreisler encore followed. Anyone who wonders how musicians can effectively perform while socially distant from each other got an answer on Friday evening.

Finally, Wilson joined countertenor John McElliott and tenor JR Fralick in a flawless, dramatic account of Britten’s Canticle II, Abraham and Isaac. Both vocalists were in splendid form, and their decision to turn their backs to sing the voice of God made a fine effect. The entire concert lasted just an hour, and transitions from one location to another and from spoken remarks to music were smooth. 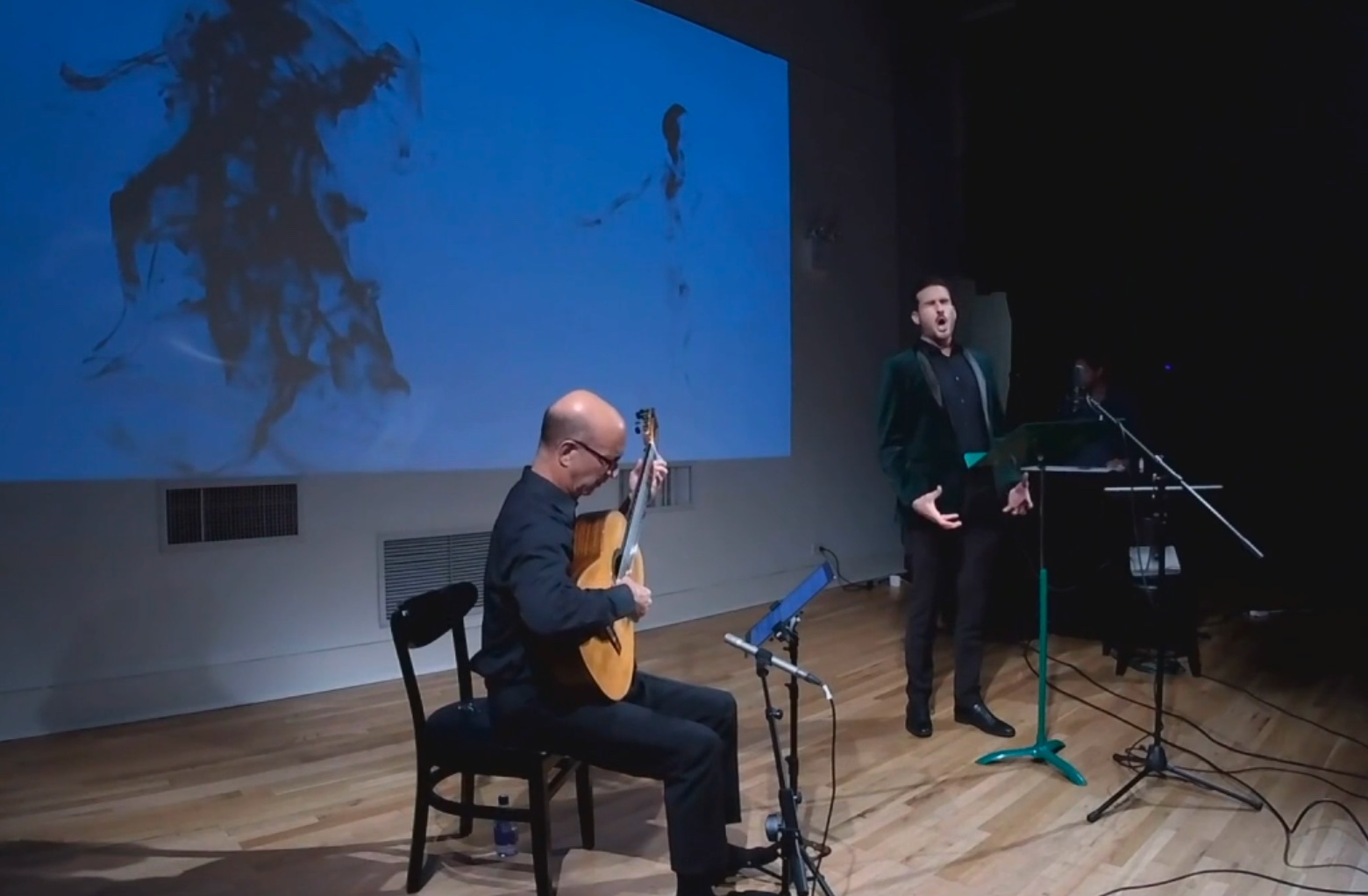 On Sunday, September 20, at Holy Trinity Lutheran in Akron, the recording of Schubert’s song cycle was prefaced by a short clip of student performances sponsored by the Cleveland Classical Guitar Society, a commercial spot for the co-sponsor, Leek Pipe Organs, and remarks and a prayer from music director Ruth Anderson.

Baritone Michael Kelly had the challenge of making Schubert’s twenty strophic, folk-like songs continuously interesting, and his dramatic instincts and altogether engaging voice combined with David Leisner’s impeccable arrangements and guitar playing made for a fine performance. Some songs worked better than others (Mein! really needs a piano), but this is an eminently portable combination that would be fun to experience out-of-doors.

Very much in the background, visual artist Kevork Mourad provided pre-made and real-time illustrations that abstractly suggested the ever-present brook and the protagonists in this tragic love story.

Too bad to miss seeing the performance in the visual context of the church — something that will certainly be included in the next program from Holy Trinity, a combined in-person and live streamed recital by organist Christa Rakich on October 4.

END_OF_DOCUMENT_TOKEN_TO_BE_REPLACED

Rodgers & Hammerstein’s Cinderella was originally produced for television in 1957 — seven years after the animated Disney film was released — and starred Julie Andrews. According to the Rodgers & Hammerstein website, it was viewed by over 100 million people. END_OF_DOCUMENT_TOKEN_TO_BE_REPLACED

The story line has its origin in an 1855 play and an 1842 farce that Thornton Wilder mined for his 1938 play The Merchant of Yonkers. When that turned out to be a flop, in 1954 Wilder made the crucial decision to re-center the show around the character of the legendary marriage broker Dolly Gallagher Levi and renamed it The Matchmaker. END_OF_DOCUMENT_TOKEN_TO_BE_REPLACED

The Dodero Center for the Performing Arts at the Gilmore Academy in Gates Mills is one feature of an impressive campus. The auditorium is shallow, the stage is deep, and the ensemble played without a shell. Throughout the program, the sound, especially in instruments’ lower registers, tended to disappear. END_OF_DOCUMENT_TOKEN_TO_BE_REPLACED