The latest program, which visits the ghetto and palace at Mantua and the ghetto and church at Venice, uses expressive instrumental music by Salamone Rossi, Giuseppe Sammartini, Antonio Vivaldi, and Alessandro Marcello, two of Benedetto Marcello’s 50 psalm settings, and Hebrew prayers and songs associated with Passover and Purim to evoke the rich cultural life of those towns. This review reports on the video of the performances made at First Baptist Church on March 20 and 21. 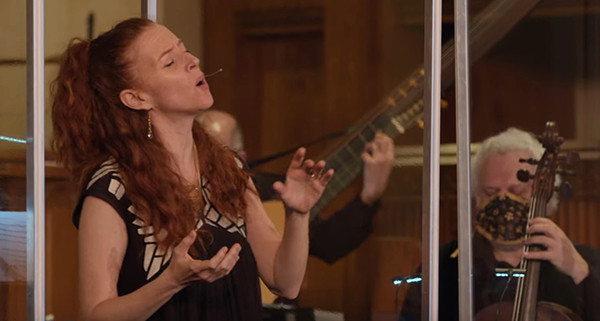 After decorating the Rossi set that opened the concert with superb divisions, special guest Daphna Mor was the vivacious soloist in Sammartini’s Flautino Concerto, and returned to lead and solo in the Hasidic Passover song Karev Yom. 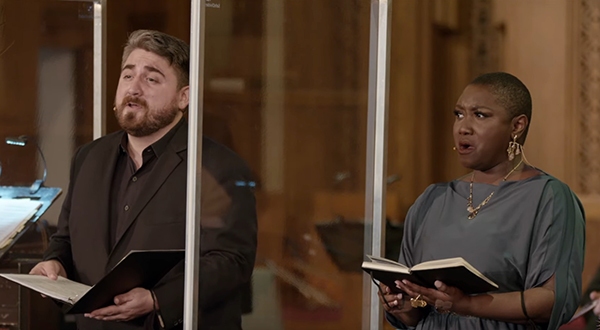 Countertenor Daniel Moody and baritone Jeffrey Strauss adroitly inhabited their roles as Jew and Christian at several points in selections from Marcello’s Psalms 15 and 18.

During the interval, cellists Daniel Moody,Jeffrey Strauss,René Schiffer and Kivie Cahn-Lipman,William Sims, Brian Kay,Alan Choo, Emi Tanabe, Ashlee Foreman,Jaacob Perry,Daphna Mor and lutenists William Sims and Brian Kay explained the distinctions between the instruments they played with consummate style: the piccolo cello, the viola da gamba, the lirone, the theorbo, and the archlute. 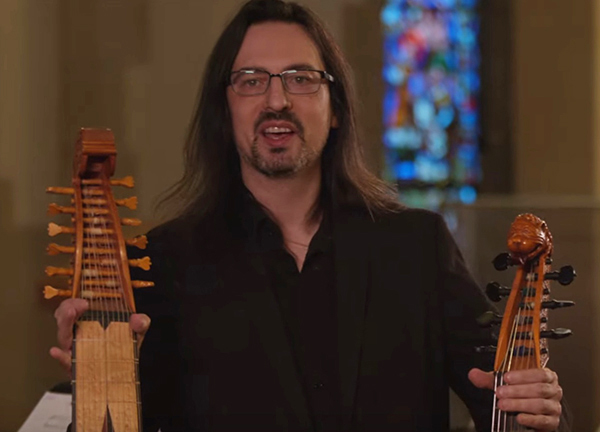 All hands came on deck for the celebrations of Passover and Purim that brought the show to an ebullient ending, largely through Siete modos de guisar las berenjenas, a catchy song that listed seven ways to cook eggplant. Elena’s grandmother cuts it into small pieces, while the preacher’s wife stuffs it with herbs, a cousin fills it with rice, and there’s another version called Alburnia (no details). And you can bake it into pastries to serve with hard boiled eggs at a banquet, make it into a Maljasina salad with lots of EVOO (good with leftover hen), or bake it in the oven with oil and pepper.

As the song continued, with interludes about an uncle who loves to drink wine and an infectious refrain, the company ratcheted up its musical energy and movements, bringing down the socially distanced house and making you wish you’d been physically present. You just might have picked up a tambourine or a hand drum and joined the fun.

END_OF_DOCUMENT_TOKEN_TO_BE_REPLACED

Supported by engagingly, yet simple staging by Cara Consilvio, a well-prepared cast of singers told the archetypal story of Cinderella with charm and flair. Framing the production was  a sparse but colorful set and wonderful lighting by Dave Brooks. END_OF_DOCUMENT_TOKEN_TO_BE_REPLACED