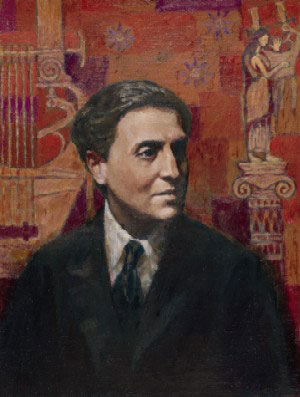 Today, May 16, would have seen the first of three Cleveland Orchestra concert performances of Alban Berg’s Lulu, in the two-act version premiered in 1937. Berg’s opera, with soprano Barbara Hannigan as the title character, was to have been the centerpiece of the “Censored: Art and Power” mini-festival featuring pianists Aaron Diehl and Conrad Tao, and soprano Audrey Luna. Those plans were scuttled by the pandemic, but this may be a good moment to revisit Alban Berg. Click here to watch a 1972 Berg documentary produced by BBC 2 with Helene Berg, Pierre Boulez, Willi Reich, Alfred Kalmus, Jascha Horenstein, Jean-Rodolphe Kars, the BBC Symphony, and the Delme String Quartet. Note: the last eight minutes are missing.

THIS WEEKEND ON THE WEB (AND AIRWAVES): 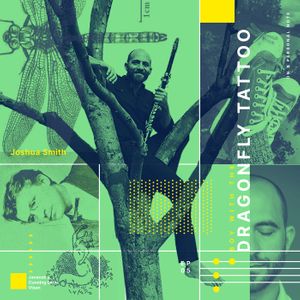 Principal Flute Joshua Smith is featured in Mozart’s Flute Concerto No. 1 on today’s 12 Noon Lunchtime with The Cleveland Orchestra on WCLV104.9 Ideastream, and also in the latest edition of the Orchestra’s podcast series, which is now available for listening. In “The Boy With the Dragonfly Tattoo,” Episode 5 of On a Personal Note, Smith explains how performing Janáček’s opera The Cunning Little Vixen left a lasting impression, and why the dragonfly just may be his favorite insect. Listen here.

Italian composer Claudio Monteverdi was born in Cremona either on this date or May 15 in Cremona. Put a marker in your calendar for the release next week of the composer’s Vespers of 1610 in Apollo’s Fire’s “Music For the Soul” series. Part 1 comes out on May 19, Part 2 on May 22 (subscribe to the whole series here.) END_OF_DOCUMENT_TOKEN_TO_BE_REPLACED 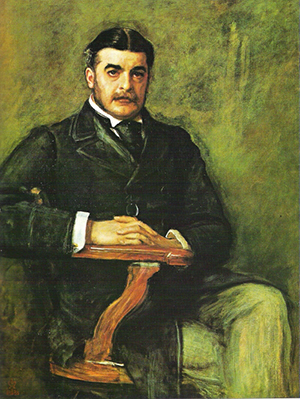 On this date in 1842, composer Arthur Seymour Sullivan was born in London. As the musical half of the Gilbert & Sullivan team, he joined librettist William Schwenk Gilbert in skewering many elements of British society in fourteen comic operas produced by Sir Richard D’Oyly Carte — many of them at London’s Savoy Theater. As a good Victorian, he also wrote oratorios and church music (most of that forgettable, including the triumphalist hymn “Onward Christian Soldiers” and the hyper-sentimental The Lost Chord).

Gilbert and Sullivan got skewered themselves by British comedienne Anna Russell in her sketch, “How to Write Your Own Gilbert and Sullivan Opera,” captured along with other famous parodies during her live performance at the Baltimore Museum of Art in 1984. Watch here, or listen just to that individual sketch here. 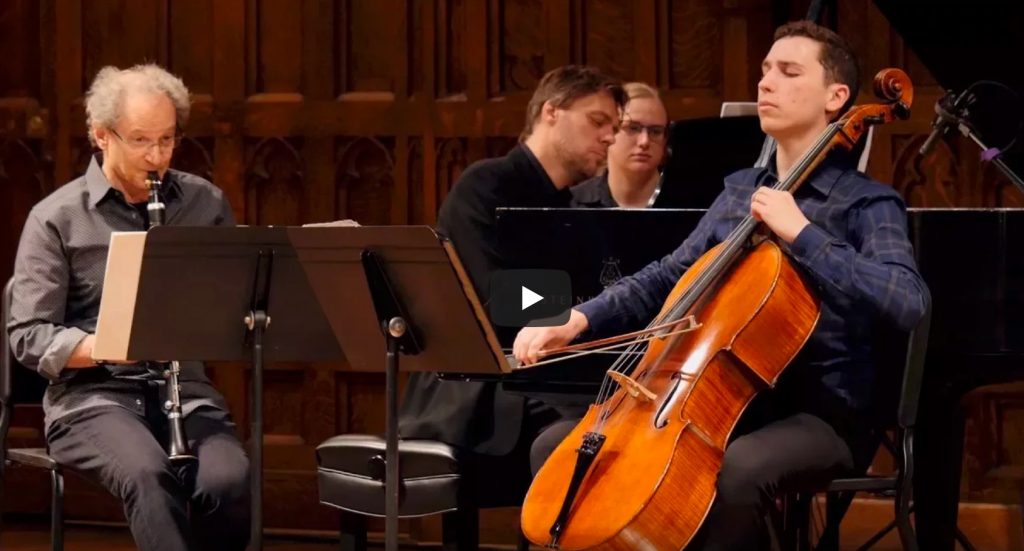 Celebrate the birthday of French composer Gabriel Fauré, born on this date in 1845, with his Trio for Clarinet, Cello and Piano in d, Op. 120. Click here to watch ChamberFest Cleveland players Franklin Cohen, clarinet, Oliver Herbert, cello, and Andrius Žlabys, piano in a performance at Harkness Chapel at CWRU in June, 2017.

The Cleveland Orchestra shares its “Mindful Music Moments” with over 20,000 students in more than 50 schools in Northeast Ohio, providing a way to “start each day with calm and focus.” Here’s such a moment, an excerpt from Má Vlast by Bohemian composer Bedřich Smetana, who died on this date in 1884. And click here to listen to a 1970 performance of the entire “Moldau” movement by the Orchestra under George Szell. END_OF_DOCUMENT_TOKEN_TO_BE_REPLACED

ON THE WEB AND THE AIRWAVES TODAY:

WCLV’s Lunchtime with The Cleveland Orchestra features hornist Richard King, an episode of the Royal Concertgebouw Orchestra’s Mahler Festival from Amsterdam presents the Fourth Symphony led by Iván Fischer, a piano trio from CIM’s archives plays Shostakovich, pianist Jeremy Denk talks about “How to Think Like Bach” from The Greene Space, and the nightly episode from the MET Opera will be Massenet’s Werther. Details in the Concert Listings.

In lieu of this year’s cancelled Cleveland International Classical Guitar Festival, director Armin Kelly is offering nine videos featuring Czech classical guitarist Petra Poláčková, “a particularly popular regular at our Festival who was scheduled to join us once again this June. END_OF_DOCUMENT_TOKEN_TO_BE_REPLACED

ON THE WEB AND THE AIRWAVES THIS WEEKEND:

Reaching into recent and earlier archives, WCLV’s Cleveland Orchestra on the Radio features Bruckner’s 7th Symphony under Franz Welser-Möst on Saturday, and Weber, Mozart, and Beethoven led by George Szell on Sunday. The MET Opera changes things up on Saturday with The Opera House, a 2017 feature-length documentary about the 1966 creation of the New Met in Lincoln Center, then returns to opera on Sunday with “Cav and Pag.” Also on Sunday, violinist Edwin Huizinga and guitarist William Coulter, who perform together as Fire and Grace, offer folk and Baroque for Mother’s Day, and in the latest episode of Oberlin Stage Left, the Oberlin Orchestra plays Berlioz’ Roman Carnival Overture and Stravinsky’s Rite of Spring in Finney Chapel in advance of its 2016 appearance at Chicago’s Symphony Center. And, just announced for Sunday, Puccini’s Turandot featuring soprano Othalie Graham is the subject of the Detroit Symphony’s latest watch party. See our Concert Listings for details.htt

END_OF_DOCUMENT_TOKEN_TO_BE_REPLACED

The Cleveland Orchestra announced early Friday afternoon that all its summer concerts at Blossom and Severance Hall are cancelled due to the novel coronavirus pandemic, with the exception of The Lord of the Rings: The Fellowship of the Ring in Concert [July 17-19] and Harry Potter and the Chamber of Secrets™ in Concert [August 29 and 30]) which will be moved to summer of 2021. Tickets purchased for those movie presentations will be valid for the 2021 Blossom Music Festival dates. Lawn tickets already purchased will be honored in 2021.

ONLINE & ON THE AIRWAVES TODAY:

• the end result of a Baldwin Wallace Vocal Performance Class Capstone Project — a 30-minute version of Humperdinck’s Hansel and Gretel performed in English, with interactive artwork by students pre-K through Grade 5

• Lunchtime with The Cleveland Orchestra on WCLV

• and a CIM virtual concert featuring its New Music Ensemble in a performance of Keith Fitch’s Ruthless Voicings.

News is coming in about Oberlin’s summer programs. BPI, the Oberlin Baroque Performance Institute, will be held online from June 22-28, focusing on the music of Johann Sebastian Bach, and will offer three levels of access — one of them free. See details here. The Organ Academy, designed for students middle school and up, will also be held online from June 21-16 (go here for details). The Flute Academy, Hinton Bass Institute, Piano Festival, Sonic Arts Workshop, Trumpet Workshop, and Vocal Academy are cancelled. Credo Chamber Music, a guest event, will be held online (details here).

In its first announcement about the 2020-2021 subscription season, Apollo’s Fire is anticipating adjustments to future concerts due to the pandemic. END_OF_DOCUMENT_TOKEN_TO_BE_REPLACED

END_OF_DOCUMENT_TOKEN_TO_BE_REPLACED

A new CD by Christa Rakich, who is currently Visiting Professor of Organ at the Oberlin Conservatory, gives a nod in two directions. As its title announces, it’s an homage to her former teacher and colleague, the late Yuko Hayashi, longtime professor at the New England Conservatory and curator of Boston’s Old West Church Organ Series. It’s also the first recording to be made of Richards, Fowkes & Co.’s Opus 16 instrument, built in 2008 for Goodson Chapel of the Duke Divinity School in Durham, North Carolina. END_OF_DOCUMENT_TOKEN_TO_BE_REPLACED

END_OF_DOCUMENT_TOKEN_TO_BE_REPLACED

Hailed by the New York Times as “The Best Classical Music Ensemble of 2018,” Wet Ink Ensemble has lived up to this acclaim once again with their recent release Glossolalia/Lines on Black. The album takes its name from the two extended works by Wet Ink members Alex Mincek (saxophone) and Sam Pluta (electronics). The remainder of the septet includes Eric Wubbels (piano), Erin Lesser (flutes), Ian Antonio (percussion), Josh Modney (violin), and Kate Soper (voice). END_OF_DOCUMENT_TOKEN_TO_BE_REPLACED

Croatian-born pianist Martina Filjak, now living in Berlin, has released her latest album, Light and Darkness, featuring music by Franz Liszt — plus an epilogue by Arvo Pärt. The disc confirms once again all the special technical and interpretive qualities that won her the gold medal at the Cleveland International Piano Competition in 2009. END_OF_DOCUMENT_TOKEN_TO_BE_REPLACED