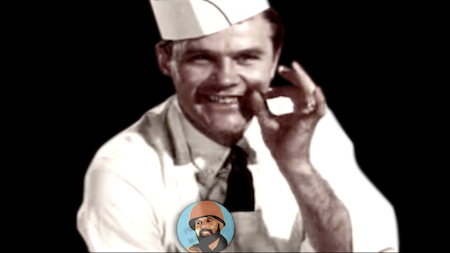 Of course, Kasumi and Fitch knew that the soldier selling his fiddle to the devil would play an important role in the video. “I wanted to parallel this Faustian bargain we’re witnessing in real time, which is today’s politics,” Kasumi said during another interview last week.

She noted another parallel: the “chaos, terror, and isolationism” of the period around World War I — another centennial this year. “Soldier’s Tale isn’t so much a protest piece as it is a cautionary tale, a coming-of-age story for the apocalypse,” she added.

The devil and soldier are both played by dancer Martín Céspedes in footage shot by Kasumi. “Oh my god, he is such a great devil,” she said. Some small roles, like the old woman and the peddler, are cut from this version of the piece. The filmmaker explained that they’re part of the Russian folk theater tradition, which was important to writer C. F. Ramuz for the original text. Her “raw materials,” as she put it, are different.

The project is actually Kasumi’s second foray into Soldier’s Tale — the first was a collaboration with the New York Philharmonic in 2005 which included several other components: narration, puppetry, and acting. The CIM performance boils it all down to Stravinsky’s music and Kasumi’s newly created visual narrative.

“This was a totally fresh start,” she said. “The advantage is that I already knew the music really well, and now I really know it — oh my goodness, I worked on the film for five months.”

When we spoke, Kasumi had just heard the first rehearsal with musicians together with the film. “It went really well,” she said. “They are so good — great conductor, great players. I’m excited.”

That conductor is CIM student Dean Buck. In an article on the conservatory’s website, Fitch noted Buck’s prior experience conducting the entire piece, which is known for its challenge to players and maestro alike. “He’ll wear headphones, and before each movement there are clicks to indicate the tempo. The thing about Stravinsky’s music is there’s very little rubato, so everything works out as long as the tempo is kept.”

How were those tempi chosen? “We found a recording that we really liked, where the tempi were correct — they were Stravinsky’s tempi,” Fitch said. 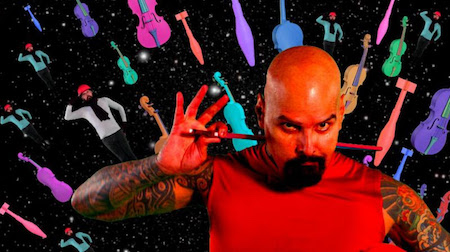 With Kasumi as guest artist for the evening and Soldier’s Tale as the centerpiece, everything clicked for Fitch to pair the work with Esa-Pekka Salonen’s Catch and Release. Not only does it have the same instrumentation as L’Histoire — it was written as a companion to that work — but it also features a visual accompaniment by Kasumi: her 2010 Quadrascope.

“It’s a totally different work,” Kasumi said of Quadrascope. “It’s much more abstract. With Catch and Release, there’s a mathematical playfulness, an intensity, and a hyper-layered quality, and this film reflects that.”

Rounding out the program is Stravinsky’s 1914 Three Pieces for String Quartet. “To open up the program, I wanted something else by Stravinsky for continuity,” Fitch said. The Three Pieces “set up the world we’re living in with L’Histoire really well, and they’re pieces that often get studied but people don’t hear them live.”

On Thursday, October 25 at 4:30 pm in Mixon Hall, Kasumi will discuss her work during the free and open-to-the-public New Music Symposium.

With this work, premiered in 1907, Sibelius offered a bold departure from the explosive emotionalism so prevalent in late-Romantic era music. This symphony was a renewed embrace of Classicism’s purity of form and melody, and one that, oddly enough, left many initial audiences of the day somewhat bewildered. END_OF_DOCUMENT_TOKEN_TO_BE_REPLACED

After eating a Po’boy from The Dawg Bowl Cajun food truck, I caught the first half of Brian Culbertson’s show in The Connor Palace Theatre. END_OF_DOCUMENT_TOKEN_TO_BE_REPLACED