For its latest In Focus episode, “Visions and Impressions,” The Cleveland Orchestra makes a gesture in the direction of welcoming winds back into the action, although principal flute Joshua Smith’s contribution to the event comes in the form of two unaccompanied pieces that leave him looking very lonely on the Severance Hall stage.

Standing in a gobo pool of light and surrounded by red stage illumination, Smith sounded anything but solitary in Tōru Takemitsu’s Air. His handsome tone, ranging from limpid to intense and suggesting techniques borrowed from the Japanese nohkan, seemed to set every molecule of Severance Hall’s air in motion. He returned later in the program with Debussy’s iconic Syrinx, this time playing in near darkness.

In between, Franz Welser-Möst and the full string sections of the Orchestra packed the now violet-lit stage with physically distanced musicians for fifteen of Prokofiev’s twenty Visions Fugitives. Evanescent piano pieces that Rudolf Barshai arranged for strings, they range in style from the elusive to the lyrical, from the maudlin to the lush. As in previous In Focus episodes, the Orchestra had little trouble with ensemble due to being spread out. Tiny solos became important details in the hands of violinist Peter Otto, cellist Mark Kosower, and bassist Max Dimoff. 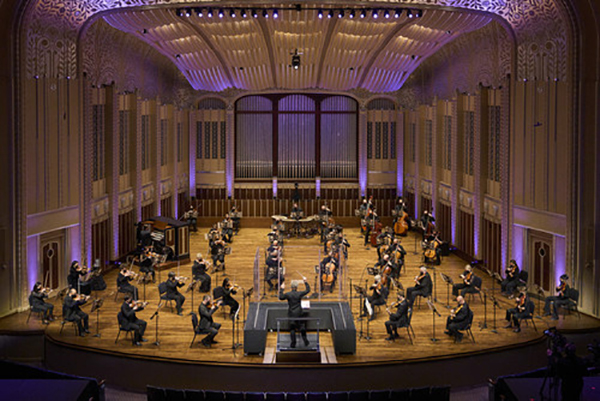 To end the program, Paul Jacobs was featured in Poulenc’s Concerto for Organ, Strings, and Timpani, performing from the console of Severance Hall’s E.M. Skinner instrument modestly located at the back of the second violin selection.

In his spoken remarks, Jacobs noted that Poulenc begins the work “quoting and distorting J.S. Bach’s great Prelude in g minor,” then goes on to weave “a tapestry of styles in a natural way.” You can usually count on the composer for a big dose of musical syncretism, and he checks off a number of stylistic boxes in this sometimes solemn, often cheeky, and always entertaining work.

As expected, Jacobs’ performance was flawless, but there were several moments — like the first Allegro — when it felt as though he wanted to move the established tempo forward. It seemed deliberate and careful rather than breezy and spontaneous — and Jacobs took full advantage of his opportunities to break free. 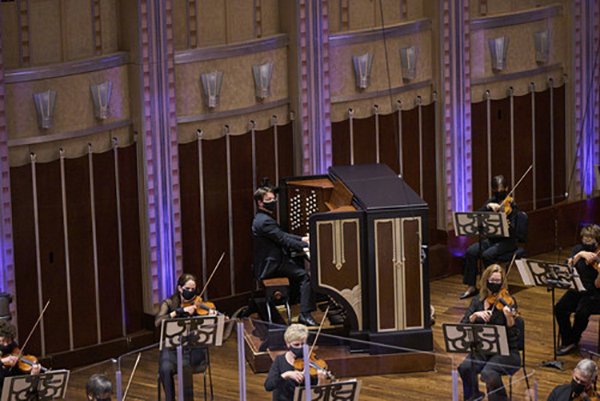 At other points (the long crescendo late in the work comes to mind), the brighter sounds of the organ got buried in string tone, and it generally sounded a bit distant. But the soloist found plenty of luscious sounds to delight the ear in softer passages.

Vibrant playing from all quarters and dramatic punctuation from timpanist Paul Yancich brought the concerto to an exciting conclusion, but not before Mark Kosower’s lovely colloquy with Jacobs provided a lush moment of repose.

END_OF_DOCUMENT_TOKEN_TO_BE_REPLACED

Supported by engagingly, yet simple staging by Cara Consilvio, a well-prepared cast of singers told the archetypal story of Cinderella with charm and flair. Framing the production was  a sparse but colorful set and wonderful lighting by Dave Brooks. END_OF_DOCUMENT_TOKEN_TO_BE_REPLACED