Based on recent events, its new designation might well be “Chamber Music Way” in honor of the fine performances that are taking place this month at Gilmour Academy in Gates Mills and The Grove Amphitheatre in Mayfield, courtesy of ENCORE Chamber Music Institute and ChamberFest Cleveland, respectively. In addition to the distinction of presenting some of the first in-person performances to come onto the calendar since the pandemic, both organizations were making their debuts in new venues.

ENCORE had previously packed its audiences into the music room of Tudor House, a lovely old mansion on the grounds of the Academy where air conditioning was simulated for the performers by fans blowing across tubs of ice. Needless to say, the new 350-seat auditorium is more agreeable to musicians and audiences alike, although its relatively dry acoustic tilts more toward theater than music. The architects have covered the entire seating area with a shell, which thrusts sound out from the stage but somewhat confuses its point of origin.

The Ariel delivered something rare in the COVID-19 era: a full-length concert with intermission. Face masks were obligatory. Their performances of Schumann’s A-Major Quartet, Amy Beach’s Op. 89 Quartet, and Ravel’s Quartet in F were assured, faultless, and as intended, instructive for the largely student audience. 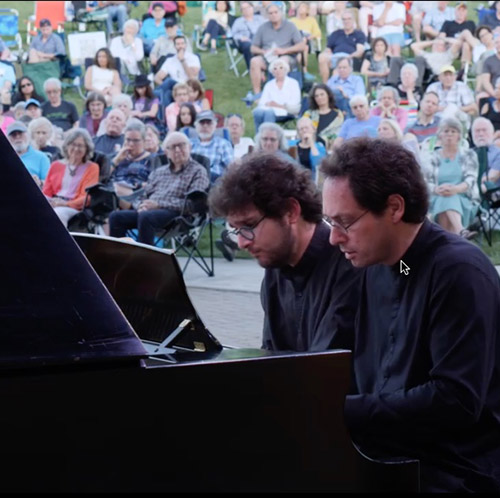 Down the road 4-½ miles on Saturday, June 12, ChamberFest Cleveland held its second al fresco performance in The Grove Amphitheatre, a lovely grassy bowl terraced with artificial stone blocks facing a fully-equipped stage house. The audience perched on various levels on lawn chairs and blankets, some enjoying food and snacks, and imbibing beverages. Again, the event was a full-length concert and included an intermission.

The program, titled “Rambunctious Fun,” departed agreeably from your usual chamber music menu, beginning with an entertaining selection of nine Bartók Violin Duos played by Itamar Zorman and Diana Cohen. Wildly varied and infused with wit and humor, they provided the duo with a string of miniature ways to begin the evening’s conversation with the audience.

Alexander Zemlinsky’s sometimes tumultuous, sometimes improvisatory-sounding Clarinet Trio gave Franklin Cohen and his sidekicks, cellist Zlatomir Fung and pianist Roman Rabinovich, more communicative material of which they made the most.

What would an outdoor concert be like without birds? Second question: do birds hate Schubert, or do they have a problem with piano four-hands? The Grove’s avian air force gained vocal strength during Shai Wosner’s remarks and became more engaged as he and Roman Rabinovich made their dramatic way through Lebensstürme. It’s a piece that may resemble Schubert’s F-minor Fantasy a bit too closely in its frequent grand pauses and restatements of previous material, but the duo gave it a convincing reading, ignoring all the ambient tweeting.

Things in the rafters calmed down when soprano Amanda Powell closed out the concert with a selection of folk songs from around the globe. Supported by Franklin Cohen, cellist Dane Johansen, and Shai Wosner, and enhanced by several clever arrangements by Dave Morgan and one by Paul Ferguson, Powell once again confirmed her reputation as a singer who can put any style of music across with ease and allure. Her ability to get inside and project the ethos of Bulgarian, Cypriot, Arabic, and Sephardic songs as effectively as she sings Shenandoah remains a wonder. The audience — the majority new to ChamberFest by a show of hands — loved it.

Franz Schmidt’s Symphony No. 4 showcased the ensemble, under guest conductor Jonathan Berman, in the standard conventions of a not-so-standard piece. But at the start of the program, the musicians were equal partners to pianist Cédric Tiberghien, whose playing could be as bold as the full orchestra or as intimate as any instrumental solo. END_OF_DOCUMENT_TOKEN_TO_BE_REPLACED

END_OF_DOCUMENT_TOKEN_TO_BE_REPLACED

Jackson began the program with a recitation of Langston Hughes’ poem “Helen Keller” — the first of five poems by Hughes that served as interludes between each piece on the first half. END_OF_DOCUMENT_TOKEN_TO_BE_REPLACED

Pianos with pins and tape on strings, a bass drum and tam tam, crotales, Almglocken, and vibes. Microphones were hooked up all around the instruments. The feed was sent to speakers around the room. Lighting designer Nicholas Houfek hung incandescent globes over the arrangement of instruments from thin black wires stretching across the beams. END_OF_DOCUMENT_TOKEN_TO_BE_REPLACED

From the podium, Elim Chan set an ambitious tone for the evening. The rising star conductor, here in her Cleveland Orchestra debut, has a commanding style, and every twist and turn in Saturday’s performance tracked closely with her baton. END_OF_DOCUMENT_TOKEN_TO_BE_REPLACED