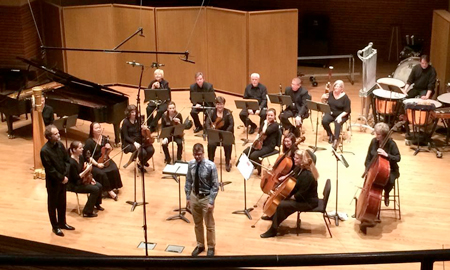 On April 7 at 7:00 pm at the Bop Stop, Keith Fitch and his outstanding CIM New Music Ensemble will make their first appearance on the Festival. The program will feature David Rakowski’s Breakdown and Préludes for Piano, Stephen Hartke’s Oh Them Rats Is Mean In My Kitchen, and Fitch’s The Range of Light.

Also returning to the Festival is the Cleveland Composers Guild. On April 8 at Judson Manor, the venerable organization will team up with the Syndicate for the New Arts for a program titled “Small Pieces | Big Impressions,” featuring seven-minute compositions by Guild members to be performed by violinist Dana Johnson, cellist Wesley Hornpetrie, and pianist Annie Jeng. The program will include Jennifer Connor’s Sevenwaters, Colin Holter’s red river of the north, Jeffrey Quick’s Piano Trio II, “Experience,” Ryan Charles Ramer’s I Have Wasted This Life And Would Waste Any Other, Robert Rollin’s Rhapsody on Themes by Rachmaninoff, Fuga, Dolores White’s Trio Tango, James Wilding’s Preludes, and Jiří Trtík’s  Improvisation No. 30 (After Kandinsky).

END_OF_DOCUMENT_TOKEN_TO_BE_REPLACED

Supported by engagingly, yet simple staging by Cara Consilvio, a well-prepared cast of singers told the archetypal story of Cinderella with charm and flair. Framing the production was  a sparse but colorful set and wonderful lighting by Dave Brooks. END_OF_DOCUMENT_TOKEN_TO_BE_REPLACED