A strong cast of singer-actors and superb production values made Nightingale Opera Theatre’s recent production of Mark Adamo’s Little Women a beautiful experience. I saw the second of two performances in the intimate theater of the Barlow Community Center in Hudson on Sunday afternoon, July 16.

Based on Louisa May Alcott’s classic novel about four New England sisters coming of age just after the Civil War, the story centers around Jo March, who resists change and loss even as she strives to buck societal norms and establish herself as a free-spirited young writer. The role was memorably sung and acted by the indefatigable Erin Sura. 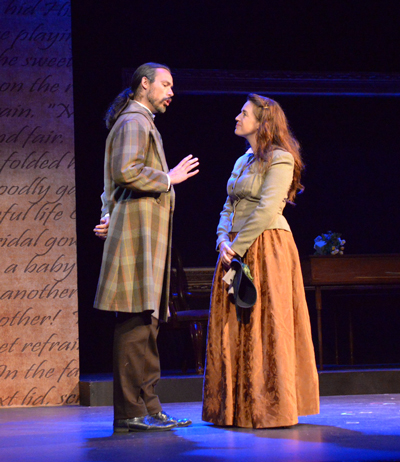 We meet the four sisters in the attic of the March house at the top of the story, and revisit them at the end of the opera. As described by the composer, there’s the “distracted” Meg (Denise Milner Howell), the “ethereal” composer Beth (Lara Troyer), and the “peppery” artist Amy (Melissa Davis), the vagaries of whose lives we’ll follow through the course of the opera. Marriages (Meg to John Brooke, and Amy to Theodore Lawrence — “Laurie”) and Beth’s demise bring joy and grief to the narrative. Finally, Jo accepts that things will never be as perfect as they once were, and finds her destiny with the German intellectual Friedrich Bhaer. 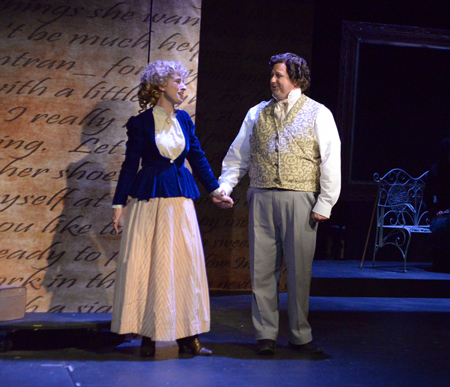 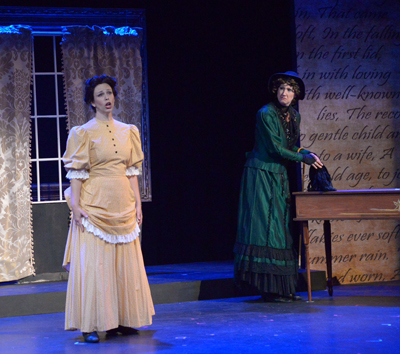 Frank Ward Jr. and Cynthia Wohlschlager lent their strong dramatic and vocal presence to the roles of the parents, Gideon and Alma March. Sandra Ross provided wonderful comedy relief as Cecilia March, the overbearing, Lady Bracknell-like aunt, and Peter Johnson was a resonant and dignified Friedrick Bhaer. Jason Fuh made the most of his cameo appearance as Mr. Dashwood, the sleazy New York publisher of potboiler novels. 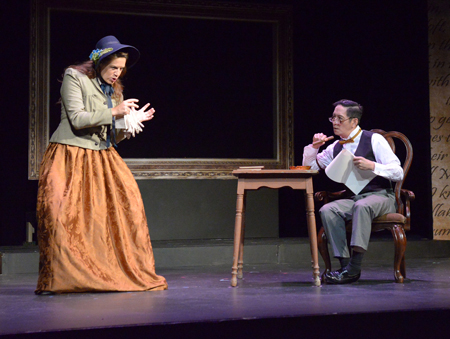 Fidelia Darmahkasih, Kaylee Gallagher, Erin Moll, and Vanessa Naghdi comprised the ghostly quartet who sang in tight chords inside a picture frame in the March attic at the beginning and end of the show. Music Director John Simmons strategically paced the musical action, and pianist Richard Jeric colorfully realized the orchestra parts at a Steinway grand (no room for instrumentalists). Chris Wortman served both as page turner and occasional kick drummer. 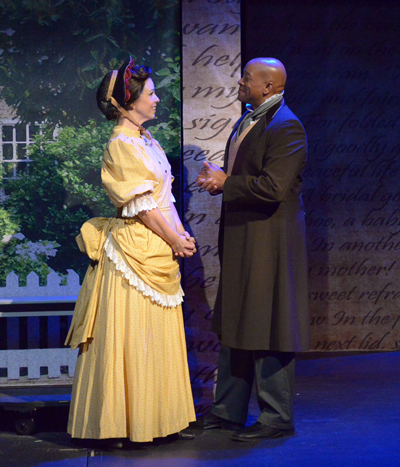 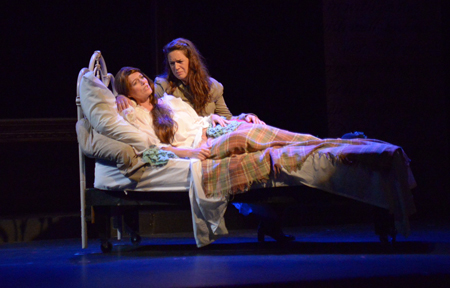 Composer Mark Adamo chose to use two musical styles for Little Women: a lyrical, tonal language for reflective moments and a “crisp and terse,” twelve-tone dialect for recitatives. It was good to have supertitles, as Adamo’s narrative passages frequently took the singers into uncomfortable vocal regions where the text — the whole libretto is written in rhymed couplets — was difficult to follow. An extra bow goes to Lara Troyer, who had some remarkably taxing lines to sing while lying on her deathbed. 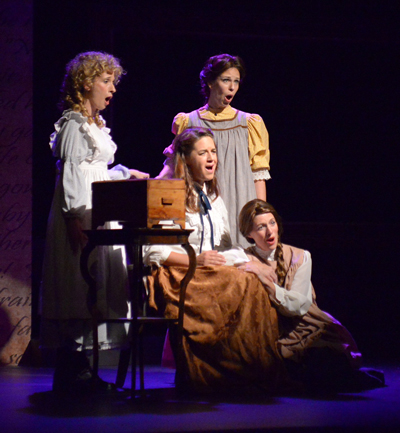 Little Women has become one of the most-produced modern operas since its debut at Houston Grand Opera, and for good reason. The novel it’s based on is well-known, and its story, once you get past the long first act exposition and develop an empathy for the sisters, tugs at the heart. This was an excellent choice for Nightingale Opera Theatre, who present a single title each year. They did themselves proud with this production.

END_OF_DOCUMENT_TOKEN_TO_BE_REPLACED

Rodgers & Hammerstein’s Cinderella was originally produced for television in 1957 — seven years after the animated Disney film was released — and starred Julie Andrews. According to the Rodgers & Hammerstein website, it was viewed by over 100 million people. END_OF_DOCUMENT_TOKEN_TO_BE_REPLACED

The story line has its origin in an 1855 play and an 1842 farce that Thornton Wilder mined for his 1938 play The Merchant of Yonkers. When that turned out to be a flop, in 1954 Wilder made the crucial decision to re-center the show around the character of the legendary marriage broker Dolly Gallagher Levi and renamed it The Matchmaker. END_OF_DOCUMENT_TOKEN_TO_BE_REPLACED

The Dodero Center for the Performing Arts at the Gilmore Academy in Gates Mills is one feature of an impressive campus. The auditorium is shallow, the stage is deep, and the ensemble played without a shell. Throughout the program, the sound, especially in instruments’ lower registers, tended to disappear. END_OF_DOCUMENT_TOKEN_TO_BE_REPLACED