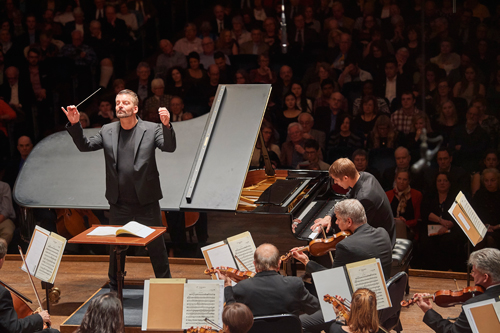 Jet lag, Egypt, the long gestation of a new musical language, and the Sea — these disparate elements all had something to do with inspiring the four wildly different pieces that guest conductor Matthias Pintscher brought to Severance Hall on Thursday evening, February 23. If there were few connections to be made between those works, each of them inspired brilliant, committed performances from The Cleveland Orchestra. END_OF_DOCUMENT_TOKEN_TO_BE_REPLACED 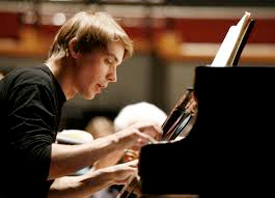 The first movement became a vast cadenza with dramatic orchestral punctuation that Tiberghien seemed to be creating on the spot — like a ruminative improvisation by an organist (a role Saint-Saëns filled for 19 years at L’église de la Madeleine). END_OF_DOCUMENT_TOKEN_TO_BE_REPLACED

And what does a performance with the Cleveland Orchestra mean to the three? “It’s one of the things that when I look at my calendar it’s a little bit unbelievable,” says Martin Helmchen. For Ray Chen, the opportunity brings on extra excitement: “I remember going to concerts at Blossom and sitting on the lawn when I was a student in 2006 and 2007 at the Encore School for Strings. So this performance has a very personal connection. To have been there as a kid and now to be on the other side, it’s just great!” Cédric Tiberghien calls it “absolutely amazing. It’s an incredible opportunity for me and I’m really looking forward to it.” Today is the first of three features spotlighting the debuting soloists. END_OF_DOCUMENT_TOKEN_TO_BE_REPLACED

Music director and conductor Daniel Meyer built his playlist around Cleveland themes and scenes. “Exploration CLE” made use of engaging selections from the classical canon and beyond that celebrated “what makes Cleveland so special.” Happily, he and his musicians avoided constructing a visual slide show, choosing to let the music speak for itself. END_OF_DOCUMENT_TOKEN_TO_BE_REPLACED

You could see the relationship at work on a practical level. Repertoire for two players at the same piano requires a certain choreography. There’s just one of each pedal to share, and the hand crossings left and right — which can be so fun to watch a soloist pull off — get more complicated when another person’s involved. At times, Pompa-Baldi drew a hand away from the keyboard and into his body, making room for Friscioni, and at the close of a few delicate phrases, the two were crouched together over the same final notes at one end of the instrument. END_OF_DOCUMENT_TOKEN_TO_BE_REPLACED

The signature sounds of these famous film scores are not so much John Williams’ invention as allusions to other classical pieces. The foreboding half-step from Jaws, growing more and more furious in the cellos and basses, shares something with Dvořák’s “New World” Symphony and Bartok’s Miraculous Mandarin. END_OF_DOCUMENT_TOKEN_TO_BE_REPLACED