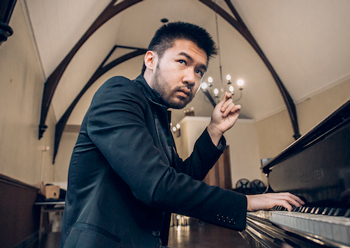 It’s difficult to know where to begin when talking about pianist-composer Conrad Tao. At age twenty-one, he has already amassed a list of accomplishments worthy of an artist three times his age. Called a musician of “probing intellect and open-hearted vision” by the New York Times, and a “thoughtful and mature composer” by NPR, Tao was named a Presidential Scholar in the Arts in 2011. In addition to a very busy concert schedule which includes serving as the Dallas Symphony Orchestra’s artist-in-residence, his new CD Pictures, on the Warner Classics label, was released in October.

During our extensive telephone interview, Tao revealed himself as thoughtful and down-to-earth, as well as a person who is acutely aware of the passage of time. The following is an edited transcript of that conversation. END_OF_DOCUMENT_TOKEN_TO_BE_REPLACED

END_OF_DOCUMENT_TOKEN_TO_BE_REPLACED

The Orpheus myth inspired French Baroque composers Jean-Philippe Rameau and Philippe Courbois to write expressive solo cantatas about the famous Greek musician-poet and his futile attempts — because of his own impatience — to rescue his beloved Eurydice from the grasp of Pluto in the Underworld. These are beautifully performed by the clear-voiced soprano Hannah De Priest and the velvet-throated baritone Jonathan Woody (who makes a walk-on appearance in the Rameau). END_OF_DOCUMENT_TOKEN_TO_BE_REPLACED

Now that live concerts are beginning to proliferate, it was delightful to hear Oberlin cello professor Darrett Adkins ring a change on the solo suite format with his Hypersuite No. 3 on September 28 in the Cirigliano Studio Theatre at Lorain County Community College. His program opened the new season of Signature Series performances in Elyria, and was dedicated to the memory of Eva Hornyak. END_OF_DOCUMENT_TOKEN_TO_BE_REPLACED