French organist Michel Bouvard visited Trinity Cathedral on Tuesday, October 24 to play a wide-ranging recital in celebration of the 40th Anniversary of the cathedral’s Flentrop organ. With the assistance of two registrants who drew and retired stops — the organ was built in 1750s Dutch style, all-mechanical and with no gadgets for pre-setting combinations — Bouvard masterfully put the 1977 instrument through its paces in stylish performances of music ranging from Renaissance dances to transcriptions of works by Vivaldi and Mendelssohn. END_OF_DOCUMENT_TOKEN_TO_BE_REPLACED

Bouvard is currently on a U.S. tour that began at Meyerson Symphony Hall in Dallas, continued with recitals and masterclasses at the University of Kansas, and after Cleveland, will end with a recital at the Maison Symphonique in Montréal. Due to language issues, in lieu of an interview, we sent M. Bouvard some questions by email to which he has graciously responded. END_OF_DOCUMENT_TOKEN_TO_BE_REPLACED 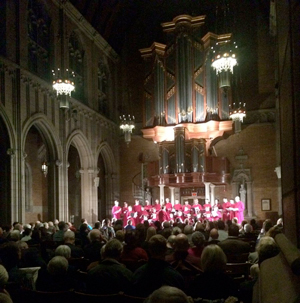 The adjective “new” is a relative term at the University of Oxford. New College was founded by William of Wykeham in 1379, and a choir has been a part of the college from its beginning. The current ensemble of sixteen boy choristers and fourteen adult clerks — a mixture of professional singers and undergraduate students — visited Trinity Cathedral on Friday, March 31, as part of their North American tour. END_OF_DOCUMENT_TOKEN_TO_BE_REPLACED

On Friday, March 31 at 7:30 pm, Oxford’s New College Choir will make a stop at Trinity Cathedral for a concert including both Anglican Church Music favorites and new works as part of the Choir’s six-city American tour.

The choir of boys and men dates from 1379, when William of Wykeham, the founder of Winchester College, established an educational outpost named The Warden and Scholars of St. Mary’s College of Winchester in Oxford. That title being both unwieldy and confusing (there was already a college of St. Mary in Oxford), the institution soon came to be known as New College.

New College Choir now has a relatively new director in Robert Quinney, who in 2014 replaced Edward Higginbottom after the latter’s four decades serving New College. Quinney assumed the directorship of the 30-voice ensemble after an organ scholarship at King’s College, Cambridge; an assistantship at Westminster Abbey (where he played for the wedding of Prince William and Kate Middleton); and a brief tour of duty as organist of Peterborough Cathedral. END_OF_DOCUMENT_TOKEN_TO_BE_REPLACED

Organist Jonathan Ryan, who pursued his undergraduate studies with Todd Wilson at the Cleveland Institute of Music before moving on to Eastman, will play the German Organ Mass, or Clavier-Übung III, on the Flentrop Organ in Trinity Cathedral on Tuesday, March 21 at 7:30 pm. END_OF_DOCUMENT_TOKEN_TO_BE_REPLACED

“It’s been a busy year for us,” Jake Swanson said during a recent telephone conversation. “Sarah and I had a residency in Oslo, Norway, and my first CD was released earlier this month. And we’re excited to be returning to the Brownbag Concert series.” END_OF_DOCUMENT_TOKEN_TO_BE_REPLACED

The duo will perform three works with the Trinity Chamber Orchestra under the direction of Todd Wilson. The program will include Johann Joachim Quantz’s Trio in c minor (arr. Sigurd Raschèr), Erland von Koch’s Concerto Piccolo (1962), and the world premiere of Dan Knorr’s Double Concerto (2015). As always, listeners can bring their lunch or purchase one on-site for $5.   END_OF_DOCUMENT_TOKEN_TO_BE_REPLACED

The Virtuosi, an eleven-member string ensemble with harpsichord conducted by Michael Gelfand, opened with a lush reading of Bach’s chorale from Cantata BWV 147, known in English as Jesu, joy of Man’s desiring. END_OF_DOCUMENT_TOKEN_TO_BE_REPLACED

Based on recent events, its new designation might well be “Chamber Music Way” in honor of the fine performances that are taking place this month at Gilmour Academy in Gates Mills and The Grove Amphitheatre in Mayfield, courtesy of ENCORE Chamber Music Institute and ChamberFest Cleveland, respectively. In addition to the distinction of presenting some of the first in-person performances to come onto the calendar since the pandemic, both organizations were making their debuts in new venues. END_OF_DOCUMENT_TOKEN_TO_BE_REPLACED

On Sunday, June 6, Cleveland piano fans got an opportunity to hear Kohlberg himself in a short solo recital that formed the coda to Music From The Western Reserve’s online concert series. END_OF_DOCUMENT_TOKEN_TO_BE_REPLACED

END_OF_DOCUMENT_TOKEN_TO_BE_REPLACED

This year the majority of the concerts are being held at a single location, the magnificent Grove Amphitheatre in Mayfield. Although the venue has no permanent seating, lawn chairs and blankets are the perfect solution. Picnics are encouraged and the responsible consumption of alcohol is permitted. Think Blossom Music Center on a smaller scale and you’ll get the picture. END_OF_DOCUMENT_TOKEN_TO_BE_REPLACED

The series opener, “Legends,” celebrated the return of in-person concerts with music by Antonín Dvořák, Enrique Granados, Paul Wiancko, and Franz Schubert. The musicians displayed the wide range of expression and color, enchanting communication, and technical brilliance that chamber music can provide. END_OF_DOCUMENT_TOKEN_TO_BE_REPLACED

Music director Franz Welser-Möst set the stage in his introductory video remarks, describing the Berg era as “the ‘Roaring 20s’ aftershock of World War I, a blooming of musical styles never experienced before or since.” END_OF_DOCUMENT_TOKEN_TO_BE_REPLACED