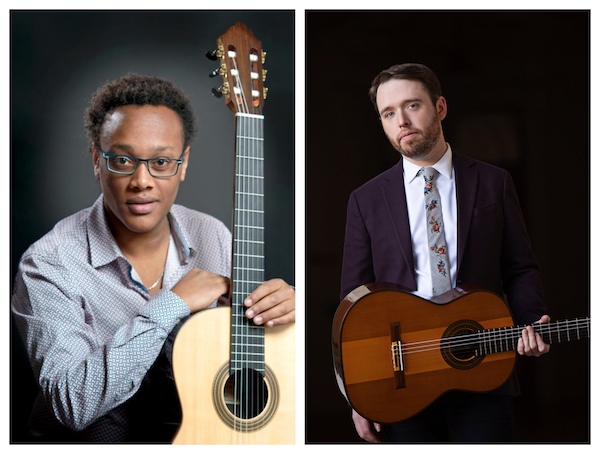 This weekend gives concertgoers the chance to hear one guitarist from France who will be making his Cleveland debut, and another from Bay Village who in the past several years, as he told me over the phone, has been re-solidifying his identity as a Clevelander.

Paris-based Raphaël Feuillâtre is in the midst of a victory lap following his Grand Prize at the 2018 Guitar Foundation of America International Concert Artists Competition. One stop on his 7-month, 50-city tour will be Plymouth Church in Shaker Heights on Saturday, October 5 at 7:30 pm, when he’ll bring works by Mangoré, Llobet, Rameau, Brouwer, Assad, Villa-Lobos, Scriabin, and Rachmaninoff to the Cleveland Classical Guitar Society’s International Series.

Co-head of the guitar faculty at the Cleveland Institute of Music and a frequent recitalist, Colin Davin is a name that needs little introduction around here. His recital on Sunday, October 6 at 5:00 pm at Christ Church Episcopal in Hudson as part of Music from The Western Reserve will include works by Ponce, Tower, Brouwer, and J.S. Bach.

The two very different programs share at least one area of overlap: the music of Leo Brouwer, a Cuban composer-turned-conductor who reached his 80th birthday in March. “He’s been on something of a global tour celebrating that,” said Davin, who will play Brouwer’s El Decameron Negro. “He can speak a few different musical languages — you’ll hear everything from aleatoric music to very angular, dissonant sounds to minimalism to Afro-Cuban folk elements.”

Brouwer was at one point a virtuoso guitarist, though injuries put an end to that aspect of his performing career. “Many people, at least of my generation and younger, have never heard him play,” Davin said. But the composer’s deep familiarity with the instrument has allowed him to write music “that’s as challenging as anything in the repertoire but very idiomatic — always maximizing the resources of the guitar in a way that makes sense for the instrument.”

After the Brouwer comes another active octogenarian: Joan Tower, who celebrated her 81st in September. Tower’s Clocks was commissioned by Davin’s former teacher Sharon Isbin, who also played an important role in the creation of Brouwer’s El Decameron Negro. “She didn’t commission it, but it was written for her,” Davin said. “It was just a piece that showed up in the mail one day.”

On either end of that program are Manuel María Ponce’s Sonatina Meridional and J.S. Bach’s Cello Suite No. 6 in Davin’s own arrangement. (Followers of the guitarist’s performances already know of his interest in both transcribing and performing the music of Bach.)

The evening before, Raphaël Feuillâtre will begin his Guitar Society recital with two works by Agustín Barrios Mangoré — the Op. 8, No. 3 Valse and the Mazurka Appassionata — followed by Miguel Llobet’s Variations on a theme of Sor. “There are so many things that went into choosing my program,” Feuillâtre said by email, “but I chose to start my concert with pieces that I really identify with the classical guitar.”

Satisfying a desire to include French music, Feuillâtre selected three works by Jean-Philippe Rameau to close the first half: Le rappel des oiseaux, Les tendres plaintes, and Les indes galantes. “They were amazingly arranged by Michel Grizard, who was my teacher a few years ago,” Feuillâtre said.

In the second half, Feuillâtre begins in Cuba with Brouwer’s La Gran Sarabanda, then hops over the Caribbean Sea and a chunk of South America to Brazil for Sergio Assad’s Aquarelle and Heitor Villa-Lobos’ Prélude No. 5 (“Homenagem á vida social”) from the Cinq Preludes.

The Brouwer and Llobet works were also part of Feuillâtre’s final-round program at the Guitar Foundation of America competition, a recital which can be heard on YouTube. “Even though the GFA was the most demanding competition for me, it was the richest in achievement,” the guitarist said. He recalled the “beautiful” Margaret Comstock Concert Hall at the University of Louisville “and the warm, generous audience” which helped him focus on the music. “The last day was the happiest of course, but throughout the competition I found greater concentration and determination in my playing than I had felt before.”

In addition to performances, Feuillâtre’s tour has included some teaching and some spare time to explore. He’s happy to have stayed with “wonderful hosts” and “shared unforgettable experiences” like seeing the Grand Canyon. “It has been such a positive experience so far, and I’m looking forward to meeting more people and exploring this vast country.” 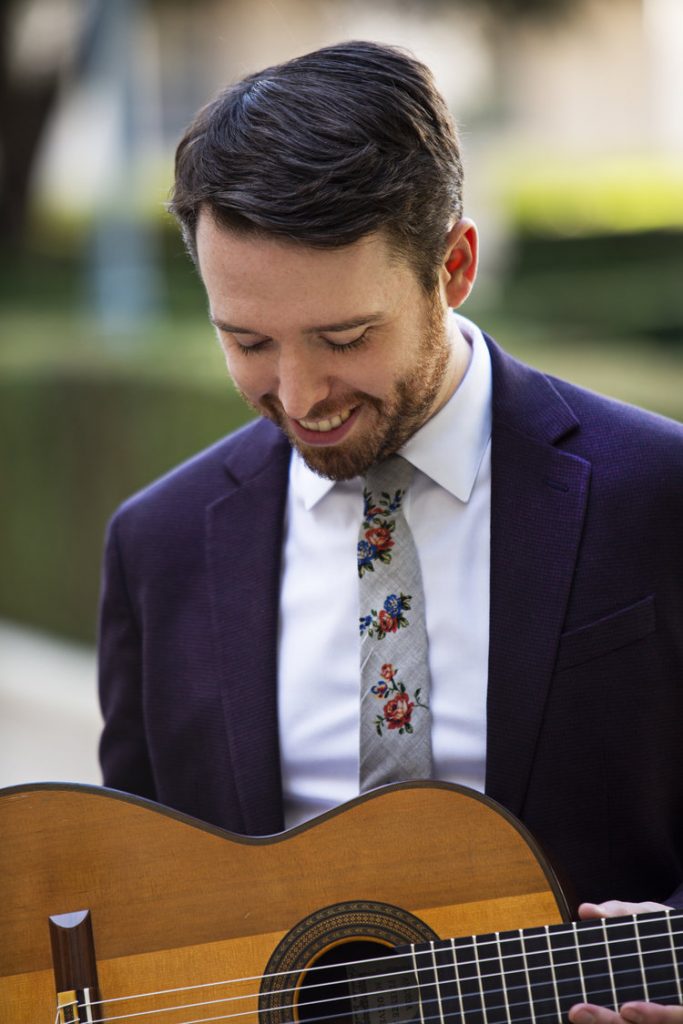 While Feuillâtre is experiencing new places, in a way Davin has been doing the same here in Cleveland. In an interview in 2017, shortly after he had moved back to the area following collegiate studies at the University of Southern California and the Juilliard School, Davin noted how much the city had grown. “It still has the comfort of home, but a little more excitement, too,” he said.

Now he’s coming up on three years since that move. “It’s been really nice to settle back in and kind of re-establish my identity as a Clevelander,” he said last week. “There’s something we have, and maybe that people from other Midwestern places have as well — a combination of grit, determination, and humility.”

Davin has also enjoyed his teaching opportunities in Cleveland. He’s “developed a good back-and-forth rapport” with Jason Vieaux, his fellow co-head of the guitar department at CIM. “We’re keeping tabs on what’s going on with all the students and concocting their paths through their musical and guitaristic development.”

Early in his performing career, Davin found it difficult to balance teaching and playing. “Through my twenties, I was working a series of odd jobs, stubbornly resisting taking up much private teaching,” he said. “I really wanted to be laser-focused on performing — and then working as an usher, or in coffee shops and restaurants. It was busy, and I was always just making ends meet. It was kind of a glorious time to be young and poor and an artist, that romanticized ideal.”

Now Davin says he’s found a niche that he loves as a teacher while keeping his performing busy. “I’d always heard that teaching makes you a more thoughtful performer, and it’s been really interesting to experience that for myself and realize it’s quite true, in my case at least.”

Asked about his own professional obstacles, Feuillâtre’s thoughts turned to competitions. “In general, they’ve been very challenging for me,” he said. “I’m thrilled that the work I put in paid off, and that I have this incredible opportunity to be on tour.”

Feuillâtre isn’t sure what the future holds, but he said he hopes to find what makes him happy. “I will start looking for an agent to continue my performance career, and perhaps find a nice teaching position as well.”

Davin simply hopes for more of the same: he loves being at CIM, and he’s on the lookout for more collaborations, solo projects, commissions, and traveling. Next year will bring not only the release of an album with harpist Emily Levin, but also a trip to perform in Australia, his first time visiting. “I guess I’m still enjoying that sense of adventure.”

Tickets are available at these links for the Cleveland Classical Guitar Society and Music from The Western Reserve recitals.

Jackson began the program with a recitation of Langston Hughes’ poem “Helen Keller” — the first of five poems by Hughes that served as interludes between each piece on the first half. END_OF_DOCUMENT_TOKEN_TO_BE_REPLACED

Pianos with pins and tape on strings, a bass drum and tam tam, crotales, Almglocken, and vibes. Microphones were hooked up all around the instruments. The feed was sent to speakers around the room. Lighting designer Nicholas Houfek hung incandescent globes over the arrangement of instruments from thin black wires stretching across the beams. END_OF_DOCUMENT_TOKEN_TO_BE_REPLACED

From the podium, Elim Chan set an ambitious tone for the evening. The rising star conductor, here in her Cleveland Orchestra debut, has a commanding style, and every twist and turn in Saturday’s performance tracked closely with her baton. END_OF_DOCUMENT_TOKEN_TO_BE_REPLACED