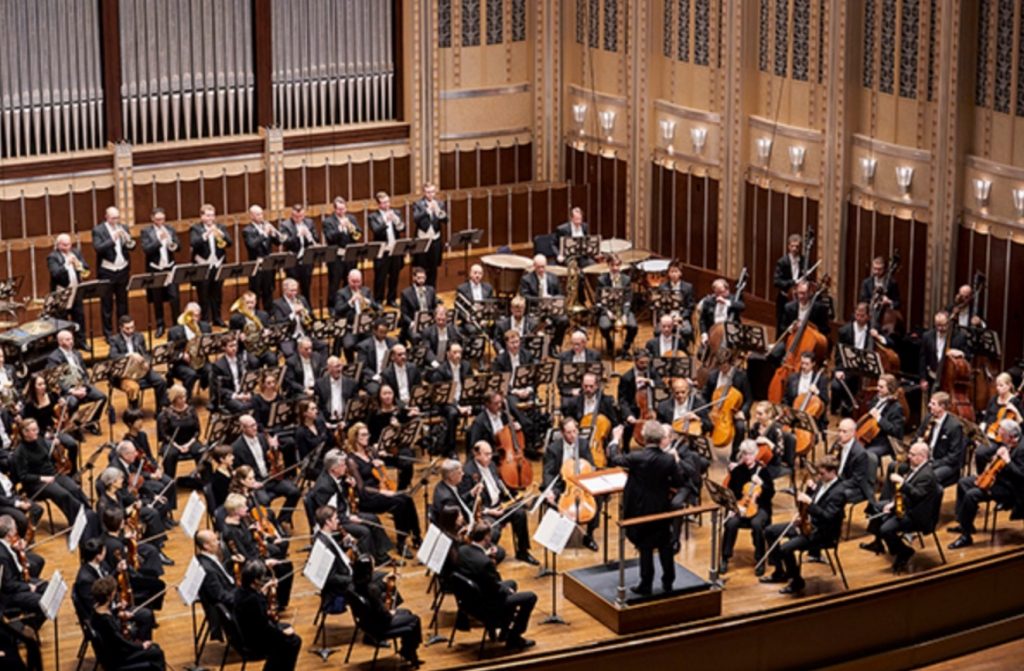 . June festivals wind up, July concerts blast off at Blossom

ChamberFest Cleveland ends the third week of its tenth season with performances of Debussy & Thorvaldsdottir on Friday at The Madison (note the correct start time is 7:30 pm and read a preview article here), Berio & Brahms on Saturday at 7:30 at the Maltz PAC (6:30 prelude concert by violinist Stephen Waarts), and on Sunday at 6:30 at The Grove Amphitheater (featuring soprano Lucy Fitz Gibbon, violinist Stephen Waarts, and harpist Sivan Magen). Details and ticket information in the Concert Listings. (Sunday’s al fresco concert is free, but reservations are required). Read preview articles here and here.

This weekend at Ohio Light Opera you can catch Cinderella on Friday at 2 pm (read our review here), The Student Prince on Saturday at 2 pm, and Hello, Dolly! at 7:30 pm (review here). All performances are at Freedlander Theatre, 329 E. University St., Wooster. Purchase tickets here.

ENCORE: Music & Ideas Festival tells stories on Friday at 7 pm with “Tales of Wunderkinds: The Hunt & Chase,” and on Sunday at 4 pm (“Tales of Travel & Transformation”) with the Verona Quartet. Both concerts go onstage at the Dodero Center at  Gilmour Academy. In-person and live stream tickets available here.

Also on Saturday: At 7 pm, Nightingale Opera will host An Evening with Jake Heggie at the Akron Art Museum (details & tickets here), at the same hour that No Exit will host a free concert by trombonist John Faieta at Heights Arts.

And at 8 pm, The Cleveland Orchestra will kick off the Blossom Season with Vinay Parameswaran conducting Friedrich Gulda’s Concerto for Cello and Wind Orchestra featuring Mark Kosower, & Aaron Copland’s Symphony No. 3, in which the composer’s Fanfare for the Common Man suddenly breaks out. Purchase tickets here.

On Saturday at 7:30 pm at Tallmadge Alliance Church, the Stow Symphony Orchestra plays patriotic favorites (tickets at the door),

And in identical concerts on Sunday and Monday at 8 pm, Loras John Schissel will lead the Blossom Festival Band in a Salute to America (tickets here).

This coming season, the CityMusic Chamber Orchestra will have a new look: there will be no conductor on the podium. The ensemble is shifting to a democratic model, an innovative structure that values the creative voice of every player. “Through a dynamic process of collaboration and attunement, democratic musicians build bonds of trust across the orchestra, resulting in exceptional performances.” Read more here.

In today’s ArtsJournal: “The elderly are the fastest growing segment of the U.S. population, and they have — contrary to some stereotypes — a deep desire to engage with arts and culture, according to a new report from the research group Culture Track.

Over 28,300 people aged 55 and older were surveyed online for the report, titled “Untapped Opportunity: Older Americans and the Arts.” It encourages museums and other institutions to disregard what it says are commonly held misconceptions about seniors losing interest in the arts over time, and to increase outreach to older audiences for programming.

“The main difference between older and younger adults who answered the survey was that those over 55 were more likely to value arts and culture events as a means of social connection — and that that percentage increased with age. Only 33 percent of those under 55 said they wanted more social connection, compared to 62 percent of those over 85.” Read the article here.

Brewster was an influential African American Baptist minister, but is best known for his 200-some published gospel songs, of which two were the first black gospel records to sell a million copies — Move On Up A Little Higher (with Mahalia Jackson in 1948), and Surely God is Able (by The Ward Singers in 1950). Brewster also wrote more than fifteen “Gospel Music Dramas,” of which From Auction Block to Glory was the first such work to feature original compositions. Among Brewster’s fans: a young Elvis Presley, who attended his services and tuned in to his radio broadcasts.

Weinrich, who was equally committed to Baroque and contemporary music, directed the chapel music at Princeton from 1943-1973 and also taught at Westminster Choir College, Wellesley, Vassar, and Columbia. Click here to listen to him playing J.S. Bach’s Passacaglia et theme fugatum on the organ of Vårfrukyrka in Skänninge, Sweden.

And Fennell, who returned to his home town after teaching for years at the Eastman School of Music, where he created the Eastman Wind Ensemble, should be well known to Clevelanders, but if not, check out our diary entry from a year ago, and enjoy an historic Telarc recording by the Cleveland Symphonic Winds (a.k.a. the winds, brass and percussion of The Cleveland Orchestra). They play Holst’s Suite No. 1 In E-Flat, Handel’s Suite No. 2 In F, Music For The Royal Fireworks, and J.S. Bach’s Fantasia In G.

On July 3, 1854, Czech/Moravian composer Leoš Janáček was born in Hukvaldy. Now seems a good time to recall one of his most remarkable works, the Sinfonietta, which was performed by Franz Welser-Möst and The Cleveland Orchestra on January 10 of 2020. That was just weeks before the pandemic closed live Severance Hall concerts down and temporarily banished wind players from the world’s concert halls (those aerosols!)

ClevelandClassical.com covered that event with a review, and Roger Mastroianni captured the moment in a photo (above). Look at all those extra trumpet players under the organ pipes!

Jackson began the program with a recitation of Langston Hughes’ poem “Helen Keller” — the first of five poems by Hughes that served as interludes between each piece on the first half. END_OF_DOCUMENT_TOKEN_TO_BE_REPLACED

Pianos with pins and tape on strings, a bass drum and tam tam, crotales, Almglocken, and vibes. Microphones were hooked up all around the instruments. The feed was sent to speakers around the room. Lighting designer Nicholas Houfek hung incandescent globes over the arrangement of instruments from thin black wires stretching across the beams. END_OF_DOCUMENT_TOKEN_TO_BE_REPLACED

From the podium, Elim Chan set an ambitious tone for the evening. The rising star conductor, here in her Cleveland Orchestra debut, has a commanding style, and every twist and turn in Saturday’s performance tracked closely with her baton. END_OF_DOCUMENT_TOKEN_TO_BE_REPLACED