The production (repeated on July 23rd) was directed by Marla Berg, with musical direction by John Simmons and piano accompaniment by Richard Jeric. The simple but effective designs were by Jeff Ridenour (stage settings) and Maureen Thomas (costumes). 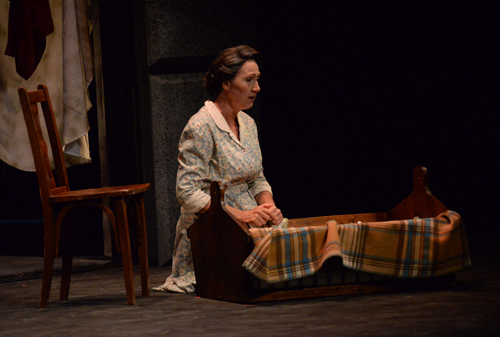 Menotti’s opera (to the composer’s own sometimes formulaic libretto) involves a freedom-fighter, John Sorel, in an unnamed totalitarian country, whose political activities require him to flee to avoid arrest by the secret police. John’s wife, Magda, stays behind with their infant child and John’s mother. Magda will join him upon receiving a visa from his destination country. It is the bureaucratic nightmare of her application for the visa that propels the opera’s action. 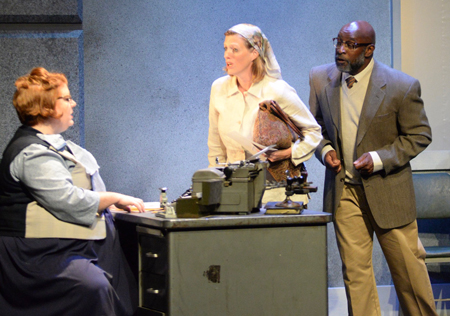 She joins a group of other emigrants at the visa office who are subject to impenetrable rules enforced by the unnamed secretary. Every time an applicant thinks that the paperwork is complete, another obstacle is presented. The Consul himself is never seen or heard in the course of the opera.

The Consul, although dated in many respects, still packs a timely punch in its representation of the hopelessness felt by its cast of emigrants — each with his or her own story — and their dependence on a bureaucracy beyond their control. In the end, Magda, whose baby and mother-in-law have died, and who believes that John has been arrested and escape is futile, commits suicide by putting her head in her oven and turning on the gas. 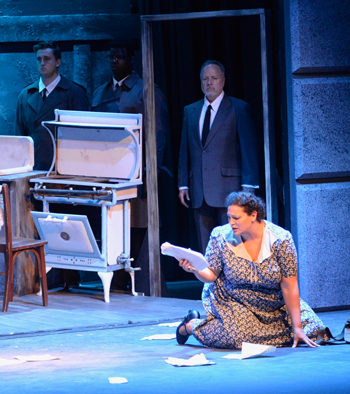 Menotti’s opera is traditional in its use of arias and ensembles in which the action stops. The music is tonal, although astringent at times, and there is no doubt of Menotti’s sure sense of what works on the stage. But The Consul made for a long night in the theater. At two and a half hours, including two intermissions, there are times when the composer seemed to be spinning his wheels. Significant stretches of the opera add little to the action, especially the the long Act 2 scene in which The Magician (Timothy Culver) performs sleight of hand tricks to impress The Secretary.

In the last scene, when many of the cast appear in Magda’s death dream to welcome her to “the other side beyond the horizon,” the length of the ensemble robs Magda’s death of its starkness. Judicious cuts would have made for much tauter overall drama. 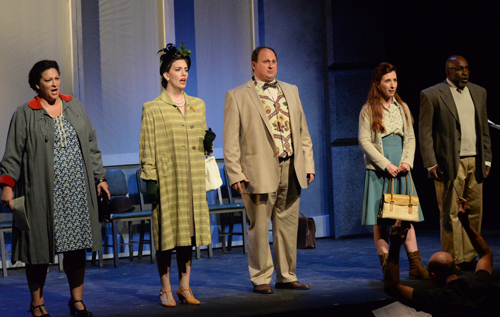 The two linchpin characters, Magda Sorel and the Consul’s Secretary, as played by soprano Diana Farrell and mezzo-soprano Cynthia Wohlschlager, were both powerfully sung and acted. Magda is on the stage for most of the opera, and we sensed her growing desperation in not being able to make anyone understand her situation. Farrell sang with unceasing power and emotion. Her aria “To this we’ve come,” was a highlight of the performance.

For The Secretary, Magda is just another case, another number on an application among hundreds of others. Wohlschlager managed to portray The Secretary’s own captivity to the government bureaucracy with sly humor. Yet in the end, her humanity comes to the fore when she attempts to warn Magda of John’s return to the city. Alas, the warning comes too late. As the phone rings, Magda has already turned on the gas. 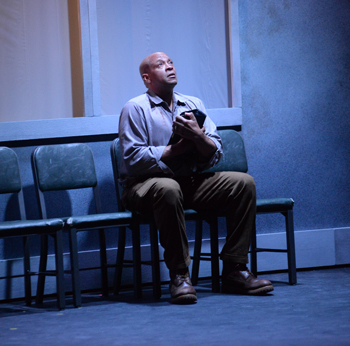 One of the strengths of the opera is Menotti’s ability to define characters through their musical style. There were no weak links in these smaller parts. Brian Keith Johnson’s John Sorel was gruff and desperate, with a booming baritone. The Mother (mezzo Sandra Ross) had the depth of voice to carry off the gentle lullaby with the infant child, yet she was able to rise to the dramatic heights at climactic passages.

Baritone Robin Rice portrayed the unctuous Secret Police Agent to creepy perfection, but his voice did not always carry the menace required. The smaller roles of people trying to get out of the country were all excellent: Frank Ward (Mr. Kofner), Lara Troyer (The Foreign Woman), Melissa Davis (Anna Gomez), Kaylee Nichols (Vera Boronel). 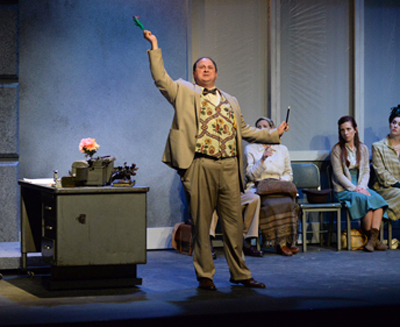 Timothy Culver (The Magician) was perfect in showing that he was not very good at sleight-of-hand, but was willing to try anything to escape the country. His bright tenor brought a bit of comic relief to the performance. The unseen but enchanting voice of Heather Morrison was heard singing a recorded “popular song” at the opening of the opera and later at a more tense moment in the story.

Is The Consul still relevant in our time? The Nightingale Opera Theatre thinks it is. The proceeds from the performances were donated to the Preemptive Love Coalition, which provides health and human relief services and peacemaking in conflict zones.

END_OF_DOCUMENT_TOKEN_TO_BE_REPLACED

Supported by engagingly, yet simple staging by Cara Consilvio, a well-prepared cast of singers told the archetypal story of Cinderella with charm and flair. Framing the production was  a sparse but colorful set and wonderful lighting by Dave Brooks. END_OF_DOCUMENT_TOKEN_TO_BE_REPLACED