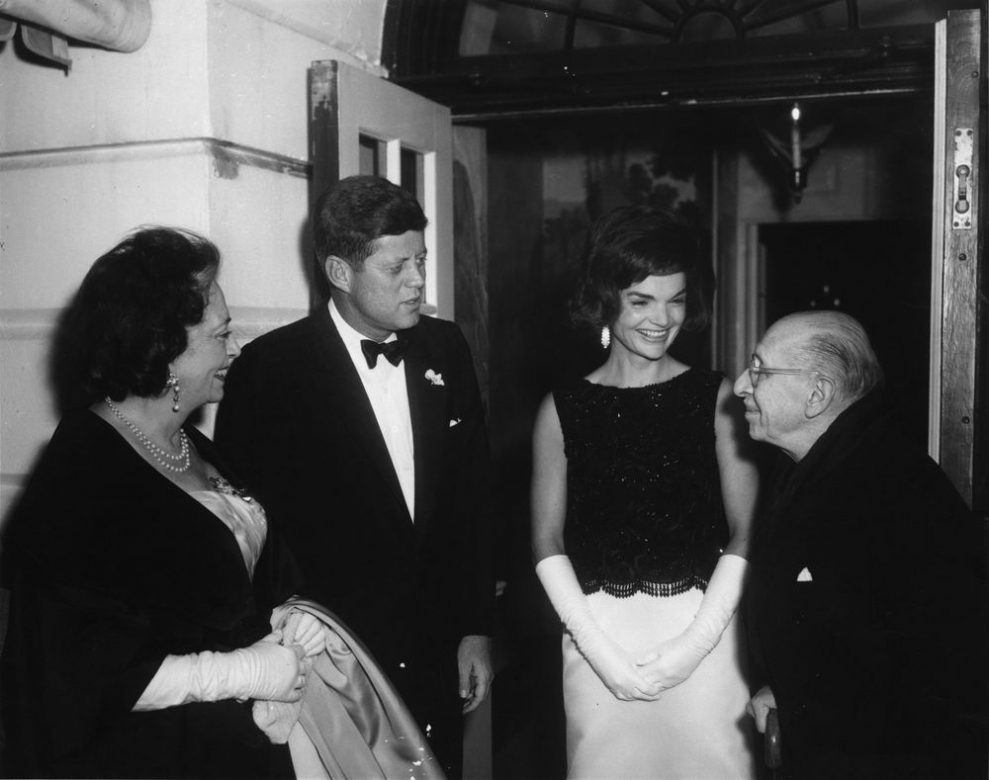 . In the Almanac: impressions of Stravinsky at Severance and the White House, Gounod’s birthday gift to wind players, the birth of Juneteenth

Both events are at the Dodero Center for Performing Arts at Gilmour Academy, 2045 SOM Center Rd. in Gates Mills. Both in-person and streaming tickets are available online.

On Friday, June 17 at 7:30 pm at the Cultural Arts Center of Disciples Church in Cleveland Hts., ChamberFest Cleveland continues with “Spirited Away.” The program includes  Spirituals and Folk Songs performed by Kings Return. George Walker’s “Molto Adagio” from String Quartet No. 1, George Gershwin’s Porgy and Bess for violin and piano, Tigran Mansurian’s Agnus Dei, and Antonín Dvořák’s “American Quartet is also on the program.” A  Prelude Talk by Dr. Owen Cantor begins at 6:30. Tickets are available online. Read a preview article here.

On Sunday, June 19 at 6:30 pm,  ChamberFest presents a free encore concert at the Grove Amphitheater in Mayfield Village, featuring highlights from the first week of the festival. Free but reservations required.

Ohio Light Opera kicks off their 2022 season on Saturday, June 19 at 7:30 pm at Freedlander Theatre on the campus of the College of Wooster with Rodgers & Hammerstein’s Cinderella. The subject of operas, ballets, gender inversions and many other treatments, the version Rodgers and Hammerstein made of this fairy tale for Julie Andrews premiered in a CBS TV color broadcast on March 31, 1957 that attracted more than 100 million viewers. Read preview articles here and here.Tickets are available online.

In a BBC article, Holly Williams writes about the rediscovery of the first known Black composer to be published, Vicente Lusitano. Born in Portugal about 1520, Lusitano became a Catholic priest, composer, and music theorist. He left for Rome in 1551, where he became embroiled in a high-profile public debate with rival composer Nicola Vicentino that was judged by a panel from the Sistine Chapel Choir. He later became a Protestant, married, and moved to Germany. His music is now being performed by Rory McCleery and the Marian Consort and composer and conductor Joseph McHardy.

Asked about the appeal of Lusitano’s music, McCleery said, “Fundamentally, it’s just really beautiful. There are very long arching phrases that seem to spin out into eternity. But also this interesting use of chromaticism: slightly spicy moments – the musical equivalent of feeling metal on metal.”

June 17, 1882, Igor Stravinsky (pictured at top with the Kennedys) made his entrance onto the world stage in Oranienbaum, Russia. Let’s celebrate the composer’s birth by recounting his pre-Severance Hall debut as guest conductor with The Cleveland Orchestra in February of 1925, when he led his Fireworks, Chant du Rossignol and Firebird Suite.

Conductor Nikolai Sokoloff found Stravinsky to be “something of a showman and not entirely endearing,” adding, “He was, in short, a pain in the neck.” (Rosenberg, The Cleveland Orchestra Story, p. 87). Stravinsky was more complimentary about his experience: “I have never seen an orchestra in which there was finer discipline and a greater responsiveness than right here in your Cleveland Orchestra.” Here’s a live performance of Le chant du rossignol by Pierre Boulez and The Cleveland Orchestra from November, 1970.

Decades later, Stravinsky left another impression as the guest of John F. and Jacqueline Kennedy at a White House Dinner in January of 1962.

The 79-year-old composer considered turning down the invitation because Pablo Casals had been invited there earlier. The backdrop of the event was the Cold War, and at this point, the Russian-born Stravinsky had been an American citizen for over fifteen years. When Kennedy asked his opinion on other Russian composers, Stravinsky diplomatically replied, “Mr. President, I have left Russia since 1914 . . . I have not studied or heard many of the works of these composers. I have therefore no valid opinion.” The president was pleased.

JFK reportedly made the perfect toast to the composer: short and humorous, but also moving. One guest later commented that Stravinsky — “an amiable man, very tiny, with a manner of twinkling gravity” — responded “with immense charm.” But in a letter written the next month, Stravinsky described the “atrocious selection of 25 people who had nothing in common with me…what are we to do at such parties other than drink. . .” And when the president’s secretary approached Stravinsky to ask how he felt, his answer was “drunk.” Given the composer’s sharp tongue when sober, leaving early was probably a good call.

On June 18, 1818, French composer Charles Gounod was born in Paris. Instead of linking to one of his popular operas or symphonic masses, here’s his Petit symphonie pour vents in honor of all the wind players who have been watching the game from the bench during the height of the pandemic. The Orchestre philharmonique de Radio France performs it in January, 2018 at the Maison de la Radio in Paris.

And on June 19, 1865, “Juneteenth” was born. In today’s edition, The Harvard Gazette writes: “Sometimes called “Black Independence Day,” Juneteenth marks the day in 1865 when the 250,000 enslaved people in Texas were first informed by a Union Army general who arrived in Galveston with his troops that they were freed by executive decree, bypassing Confederate officials who refused to implement the Emancipation Proclamation, which had gone into effect two years earlier.

“A Pulitzer Prize-winning historian and legal scholar, Annette Gordon-Reed is the Carl M. Loeb University Professor at Harvard and a native of Conroe, Texas. Both sides of her family have lived in the state since the early to mid-1800s. In 2021, she wrote the critically acclaimed historical memoir “On Juneteenth” about her life growing up there and about Juneteenth’s long, turbulent history.” Click here to read her thoughts about the holiday and how she celebrates it.

With this work, premiered in 1907, Sibelius offered a bold departure from the explosive emotionalism so prevalent in late-Romantic era music. This symphony was a renewed embrace of Classicism’s purity of form and melody, and one that, oddly enough, left many initial audiences of the day somewhat bewildered. END_OF_DOCUMENT_TOKEN_TO_BE_REPLACED

After eating a Po’boy from The Dawg Bowl Cajun food truck, I caught the first half of Brian Culbertson’s show in The Connor Palace Theatre. END_OF_DOCUMENT_TOKEN_TO_BE_REPLACED